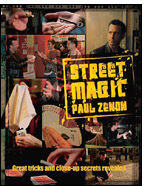 This is what a REAL magic book looks like. Zenon, certainly one of the UK’s best known and best loved magicians, has had numerous television programmes based on hit-and-run street magic, so he should know what he's talking about.

This is a hardback coffee-table book, beautifully produced on top grade paper, with superb colour plates.

If you’re already a magician, you’re going to hate this, because Zenon has not been shy about offering the best possible tricks. He tips everything. In fact, he’s tipped so much that, apparently, some of the members of the prestigious Magic Circle are up in arms.

A quick look through and you can see why! Some of the most closely guarded secrets of magic are explained in full colour, with nothing missed out.

As a collector of magic books, this is the one I wish I’d got when I was 15, rather than the endless stream of low-grade card trick books. Quite simply, if you’ve seen it on TV – and only the very best is used there – then it’s in this book.

You simply cannot go wrong with this. Zenon may have upset some of his fellow professionals, but there’s little doubt that many young magicians are going to take this on board and run with it. Out with the old, in with the new!