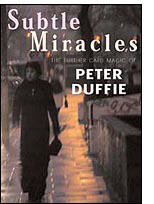 I have never ceased to marvel at the number of card magic ideas that Peter Duffie is able to come up with. He has been delighting us with his books for over twenty years, and if anything the pace has been quickening rather than diminishing.

This latest collection of card effects takes the Duffie aficionado into new territory. Over the years, Peter has developed an interest in packet tricks, and now he has decided to bring his creations together in book form, rather than market the effects as individual items.

If you have ever longed to be able to do card effects that are just too impossible to perform with a standard deck, this could be the book that gives a new lease of life to your reputation.

Although no gaffs are included with the book, most of the fakes are of the kind that are probably already sitting in your drawer, waiting for the effect that will bring them to life – especially if you already possess some spare blank cards and double-facers. As for the non-standard fakes, you can easily make these up for yourself in a matter of minutes, with some glue, Scotch tape, and a pair of scissors – the instructions are clear and detailed.

The use of gimmicked cards doesn’t of course mean that you can dispense with all card handling abilities, but the requirements here are modest, and well within the scope of anyone familiar with basic card moves. Nevertheless, for those who may be new to the field, the necessary moves are fully described at the end of the book (Elmsley Count, Flushtration Count, Ascanio Spread, Mexican Turnover, Through-the-fist Flourish, Buckle Spread and Count).

The large and clear line drawings are by David Britland, who also edited the book, and who adds a number of his own thoughtful contributions along the way.

It has often been said that spectators are not as entranced by find-a-card routines as they are by cards that suddenly change, or appear and disappear under their very eyes. The strength of the packet trick of course is that you can produce all these visual wonders with little effort. And they are all impossible to replicate by spectators who try to figure out the working by using their own deck at home.

If I had a favourite, it would have to be Fusion Assembly: a clever matrix effect in which the pieces of a torn-up card, instead of just moving around as coins do, re-assemble themselves and heal together as they are revealed.

It goes without saying that laymen will be thoroughly startled by these effects, but magicians too will be knocked for a loop, as they come to realise that they are witnessing, not just another familiar commercial routine, but something original for a change. (And when did you last come across a NEW packet trick?)

For once, the title of the book provides a fair summary of the content: these are subtle miracles indeed.

Subtle Miracles has 158 pages and 110 illustrations. It is in a comb-bound A4 format and has full colour covers. Available from www.martinbreese.com or other dealers at £22.50 plus postage. In the USA the book is distributed by Magic City Inc. Orders can be sent to martin@martinbreese.com.