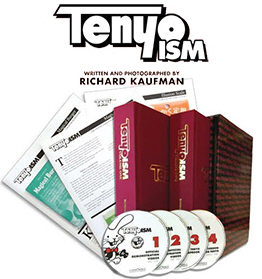 The Cult of Tenyoism. I blame Richard Kaufman

Back in the 1970’s it was rare to go to a magic convention and not see Pavel’s Colour Changing Records performed many, many times. The trick was one of the many items in the Tenyo magic catalogue. Other popular Tenyo effects at the time were What’s Next (Spot Card), Locking Card Box, Cubio, plastic Chinese Sticks. Pretty much the entire range of Tenyo items were based on other people’s - mostly standard - tricks. However this was to change and change dramatically.

By the mid-70’s Tenyo’s creative team were developing and producing magic that rivalled in creativity and ingenuity the stage illusions from the golden age of stage magic. Except that these were for largely close-up performances and did not require much skill to physically work.

Because I was around in the 70’s and had bought some earlier Tenyo magic of the standard type, I had mentally put their products into a “not for use by professionals” box, and so ignored the later miracles that started appearing towards the end of the 70’s, many of which now sell for very high prices.

Tenyo collector Ian Barradell did an evening at my local magic club, the Manchester Circle of Magicians. Not only was I fooled badly by pretty much all the effects Ian showed, but I was equally impressed with the sheer cleverness of the workings. I completely revised my opinions about the company and its products.

And while many Tenyo items would still look a tad odd in a professional’s repertoire, many of the items would fit … even if it is something to carry in your pocket to show informally. Here you are in luck because three such tricks come included with Tenyo-ism.

At its core Tenyoism is two large and heavy volumes covering almost 1400 pages printed in full colour on museum quality paper covering every trick produced by Tenyo from the early 1960’s to 2014. While working instructions are not included with every trick, many alternate handlings are and most of these are as ingenious as the original. Towards the end of Volume 2 you’ll find 84 pages of full instructions for many tricks developed by Tenyo’s creative team.

The price for the books is $250 which sounds like a lot. But look at it this way. In addition to the two volumes, which rank in the top five sets of magic books ever released for the wealth of information, historical value, concise writing, and magnificence of production, you get four DVDs, which at the very least are worth $80 if sold separately and three Tenyo tricks, which pack flat and will fit in your wallet at appx $20 each retail. None of these tricks were released commercially outside Japan. So that’s $80 for the four DVDs and $60 for the three tricks. So you are getting the two volumes for $110.

In addition the whole set comes in a very well made slipcase to fit on your bookshelf. I see the whole set both as an investment and a treasure trove of some of the most inventive magic developed over the last forty years by some of magic’s most creative minds. Very highly recommended to anyone with a serious interest in their craft. Limited to 1,000 copies.

Tenyoism by Richard Kaufman is $250 plus shipping and available here: http://geniimagazine.com/kaufman/store/html/92.html