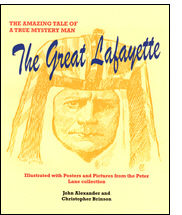 The Great Lafayette died in a fire on 12th May, 1911; and to commemorate this tragic event, John Alexander and Chris Brinson have put together a number of essays and articles relating to his life and, of course, his death. Interspersed are photographs and poster reproductions from the collection of Peter Lane.

Lafayette is one of those characters who it’s difficult for magicians to directly learn from. By all accounts he wasn’t a great magician: he was, though, clearly a superb showman, a shrewd businessman and a creator of spectacular story-themed illusions, many involving large animals. I suspect the nearest modern-day equivalent was the Siegfried & Roy show; although Lafayette was continuously touring his show, rather than having the luxury of a permanent venue.

However for anyone interested in a magical eccentrics, the golden era of magic performing and conspiracy theories, then you can’t do much better than Lafayette. Whether it’s his obsession with his pet dog Beauty (given to him by Houdini), intrigue about his sexuality (was his glamorous assistant, Lalla Selbini, his lover?), confusion (in death) between himself and his double, the incredible turnout at his funeral in Glasgow (which his brother failed to pay for until High Court action was taken) and Will Goldston’s preposterous contention that he was the ‘most hated magician in the world’, you don’t get better tabloid copy than this.

This little booklet (just over A5 size of 60 pages) doesn’t add much to our overall knowledge of Lafayette – indeed some of the articles are reprints (with permission) from previous published sources. But it brings the disparate parts together well, addressing the questions that most certainly fascinate us about the man: and this, along with the illustrations, certainly justifies its production.

For Lafayette completists this is a must. But also for anybody else interested in dipping their toes into the fascinating world of magic history, this is one magician – both in life and death - you can’t go wrong with. Step aside Chung Ling Soo, bring on The Great Lafayette!