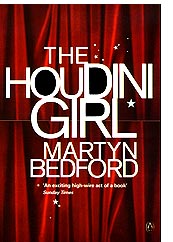 The Houdini Girl is the third novel from British author Martyn Bedford. The central character - Red - is a thirty year old professional stage illusionist from Oxford whose life is thrown into turmoil when his girlfriend (The Houdini Girl of the title) falls to her death from a train and, in his search to understand her mysterious death, he uncovers a series of shocking secrets.

Before we go any further, I guess you should know that there is some pretty graphic sexual stuff and strong language in this book. It didn't bother me, as I feel it is justified in the context of the characters and plot. It's no worse than other contemporary fiction I've read or 18 certificate films I've seen recently, but knowing how some magician's react to much weaker language when used in performance in their presence I thought I'd mention it.

I hope members will read it though, because, aside from being a damn good fast-paced page-turning thriller, the author utilises Red's narrative voice to make some intelligent observations along the way about our art and the entire business of deception and self-deception. For example, the first paragraph of the opening chapter begins: "Ask away, I won't tell you how it's done. I never divulge the methodology of a specific effect....This isn't mere adherence on my part to a tenet of The Magic Circle, nor stubborn respect for the traditions of our profession. No, my reason for keeping schtum is pure self-interest. Methods are seldom as interesting as the feats performed by their means; if I tell the audience how it's done, I diminish their respect for me. Simple as that."

The book also includes thought-provoking quotes from Ricky Jay, Walter B. Gibson and Richard Nixon (who knew a thing or two about deception), descriptions of various classic illusions from Red's performance repertoire (and an impressively accurate credit list for these in the acknowledgements) and you should know that - even more impressively - the only exposure is that of the Pepper's Ghost principle.

After fifteen years of over-enthusiastically consuming the contents of magical literature, in recent months I've turned to fiction as my release rather than the latest book of card tricks or a bound copy of an old magic magazine. And, for what it's worth, The Houdini Girl has been my favourite contemporary fictional read to date.

To order a copy of The Houdini Girl "click on the book" to go directly to Amazon.co.uk in association with MagicWeek.