The Magic Circle Performing Magic Through the Ages 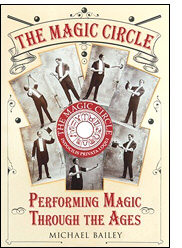 
"The Magic Circle has for a hundred years been one of the most talked about secret organisations in Britain. But what happens behind the closed doors of this intriguing society that only admits the most gifted magicians? In this fascinating history of The Magic Circle and magical performers, former president, Michael Bailey reveals how the society was created and what it stands for in a day where magic has become more and more sophisticated. Using his unique knowledge of the inside of this worldwide phenomenon, he documents the origins of magical performance and the subsequent beginnings of the society, including how it has changed in its hundred years of existence. This mesmerising book also chronicles the lives of some of the Circle's most famous performers, including Paul Daniels, David Copperfield and Channing Pollock. He takes the reader through the history of magical performers, from the age-old myth of The Indian Rope Trick and how the Rabbit from Hat trick came about. He describes a selection of the world's greatest tricks and illusions, and discusses topics such as entry to The Circle, women in magic (including the 'beautiful assistant') and the motto 'Indocilis Privata Loqui' ('keep mum'). This absorbing volume is a must for all those fascinated by the secret world of magic and magical performers, and will be an invaluable addition to any would-be magician's bookshelf."

Former Magic Circle president Michael Bailey invites readers through the doors of England's most famous magic society for the first time in its 100 year history in this magic-packed 290 page hardbound book. From the early beginnings of magic to the formation of The Magic Circle to the rise of David Blaine and Derren Brown The Magic Circle - Performing Magic Through the Ages flows effortlessly.

Michael Bailey joined The Magic Circle when he was just 18 years old and became a professional magician in 1971. In 1998 he was elected president of The Magic Circle and was awarded the Gold Medal (held by only eight other members) in 2005. More than qualified to take on this project Michael's writing style is similar to his performing style - it's fast paced and it keeps you on your toes. What could have become an overly-heavy read is in fact the very opposite. This book charges along and like a good novel once you've started you just don't want to let go!

There is so much in this book, so many fascinating stories and tales, that at times it reads like a 'who's who' of magic, both 'then' and 'now'. What I enjoyed as much as the history was the in-depth look at the current magic scene, and the magicians in it.

A perfect Christmas present for magicians everywhere (and already one of my all-time favourite magic books), The Magic Circle - Performing Magic Through the Ages delves deep into the heart of magic, and The Magic Circle, and delivers in spades.