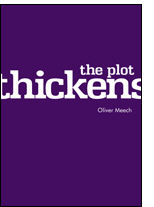 Oliver Meech was a name new to me, I only found out about his magic through the excellent Magic Bunny forum. Oliver was offering his newsletter free of charge and I took the bait, but I have to say it was one of the best moves I've made in magic for a long while. Oliver is young and his ideas/effects are 'fresh' and some are really 'off the wall'.

The book is a soft cover book with 81 pages, it contains a total of 22 effects raging from cards, coins, mental stuff and with most other things you may have lying around.

I found the Introduction to the book very interesting, it really gives the reader a good insight to Oliver the person and his philosophy on magic. To give you some idea of what I mean, in the Introduction he says "the book contains no Ace Assembly, no Coins Across, no Matrix, no Cups and Balls, no Sponge Balls, no Professor's Nightmare, and definitely no Bra Trick!" So what does it contain? Plots that are simple, interactive and most importantly, fresh.

To give you some idea about Oliver's off the wall thinking the first effect is called.........

Invisible Man......OK it's a card trick, but not an ordinary card trick though, in this effect the magician makes a spectator invisible so another spectator can look through their body to see which card was selected. I love this effect and method, this is fun to do and it goes down a storm at parties. Great thinking and very easy to do.

Cardboard Birthday Cake....How many times have you been at a gig and it's been some one's birthday, well with this effect you will never be at a loss to show the birthday spectator something really special. In this effect the magician has a card selected by the person who's birthday it is, they sign the card and the magician draws a birthday cake complete with candle on the back of the selection. The magician now leads everyone into singing "Happy Birthday", the spectator now "blows" out the candle, well you get the idea. Can you see why I just love this book, as an entertainer and full time professional very rarely does a book which contains such high quality 'working' material come along, this book is just full of this type of clever thinking.

Correctional Facility......How would you like to change the date by magic which you incorrectly wrote down on a playing card/business card, this effect achieves this in a very practical way, easy and clever.

Not Seeing The Wood For The Trees...........This is a clever perdition type effect but they won't see the ending until you guide them to it, and it's been staring them in the face all along!!!

Telling Your Face From Your Elbow..........Here we have a tattoo which is on your arm change into the chosen card (no real tattoo needed). Clever and extremely easy to do.

Fish Bowl Coin Illusion........How about borrowing a coin and drawing a fish bowl on one side and a fish on the other side, then spin the coin on the table only to find the fish is now inside the fishbowl.

Touching Transposition.........One of my many favourite routines in this excellent book. This is where a sugar lump and coin change places, the method is just plain devious and extremely clever, this principle can be applied to many other effects. I have to say, I've been in magic for over thirty years and this is a new method to me.

X-ray Coin.......is a cracker and very clever, if a spectator were to swallow a coin and you were to take an X-ray of the spectator you would see the coin, right, this you do. You then show the spectator an X-ray of their stomach and they see their initialed coin in the X-ray. Talk about being off the wall again, this is practical and very easy to do.

Swig Load.....this is an excellent way to get a marked coin into a sealed can of coke, THIS IS A KILLER. I would imagine this is the Street Magician's dream effect. I used this the other day while out and about and the method is not only very workable, it's also very easy to do.

Free Money in Every Pack.........How would you like to mark a coin, place the coin into a vending machine to buy a chocolate bar, open the chocolate bar and inside is the marked coin, this method is just about as direct as you could possibly get, again very simple and very devious. This could build your reputation as a magician who can just about do anything.

Bubble Image........Again we have a really off the wall presentation to present and use a tool all mentalist's have and many have sitting in their magic cupboards, you will use this.

Speechless........ A predicted name appears on you teeth, yes you read that right, this is a great effect but you will need to pop down to your local joke shop, I did and it cost much less than a cup of coffee next door, you'll use this and it's baffling and funny.

Random Poetry........This effect uses a tried and tested method used mainly by mentalists, this is a mental effect which appears impromptu and in the right hands would be startling. As with all of Oliver's methods, this is very easy to do.

Spin the Bottle.......Another great mental effect which I can see would play well just about nearly everywhere, especially at parties, again it uses tried and tested principles but it's Oliver's crazy presentations which make this book a must have.

Psychic Strumming..........How about this, you give the spectator a plectrum and ask them to initial it on either side, they choose a song and play air guitar (yes we've all done this!) you not only name their song but it appears on the other side to their initials. Clever and a great plot once again.

I Spy.........You ask a spectator to play the game I Spy, and just by their eye movements you discover their thoughts. This is a very clever presentation, I like this due to its simplicity of plot and method, great thinking.

Unwritten..........A spectator believes that they have a signed contract only to discover that it would be impossible, since the contract is blank and the pen cap cannot be removed. I was very intrigued to see how this was achieved as the plot is something different and could be worked in the corporate world. Again simple to do and very practical, this is a great effect to do for those business meetings or at trade shows.

Every Flavour Jelly Beans...........The title says it all. This a prediction effect where a spectator "freely" chooses the flavours of two jelly beans, you now offer the spectator a couple of beans to eat, and guess what, yes you're spot on. OK this isn't something you can do at your gigs but at the right time and place this could be talked about long after your four ace cutting sequence. It's different and we need this type of stuff to show we can do magic with just about anything at hand.

Flaming Voodoo...........This is strange both in effect and method, I had to try this out to see if it really worked, it does and it's very different. A spectator stares at a piece of paper and it bursts into flames. Crazy method which works.

Off With His Head...........This is such a clever plot, how many times have you taken a photo and accidentally cut some-one's head off, well, if you were a magician you could with just a little tap of the photo move the whole picture back into frame. Isn't that an excellent plot, once again the magic is used to correct a previous mistake you made. Great thinking and an effect you can always carry with you.

Final Signature........When ever I'm asked for a business card I always ask for the spectator's details, this is an effect you can do while the spectator jots down their details. This is the stuff I like, they won't see this coming and again you will get credit for always being able to magic at any point.

Secret Service Load.........A spectator removes a bank note from their pocket and you predict the serial number, no switches or glimpses. This is a well used principle of a con man, used here for magic purposes only!!!

At the end of each effect there is a section on credits and a section called 'notes' in this section Oliver offers variations of the effect and tips etc to help you both in methods and presentations.

If you don't buy this book you could well be fooled badly by someone showing you some of the stuff from this outstanding book.

I think we shall be hearing much more from the crazy mind of Oliver Meech, a very clever young man indeed.

The Plot Thickens costs £12.49 and is available from www.olivermeech.co.uk