The Real Deal A Magician Prepares 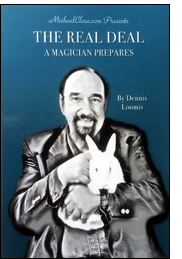 Dennis Loomis was one of magic’s general practitioners. Like with Alan Shaxon, Karrell Fox, Billy McComb, and Johnny Thompson, if they phoned and asked, “Can you do X, Y or Z?” the answer was, “Yes!” Then they figured out how to do it.

And Dennis did it. He toured the US and Canada for three years with a full evening illusion show. He did an escape act as well as escaping from straitjackets while hanging upside down from cranes and helicopters. He did birthday parties. He did a balloon show (as well as pitching them).

For five years he toured doing school assembly shows - three a day for five days of the week. He did close-up and became very proficient in mem-deck work. He made improvements to every trick he ever performed. To top it all he performed an SM themed act that caused consternation at magic conventions.

This book is the story of his magical life, his routines, and the characters he met. It’s basically about the stuff working pros talk about when they get together.

We have Michael Close to thank for this collection. Dennis Loomis had put off writing a book, and when Michael became editor of M-U-M, the magazine of The Society of American Magicians, he talked Dennis into writing it a chapter at a time. It’s regarded as one of the best series of articles ever to appear in any magic magazine.

There are tricks a plenty, all with the Loomis touch. What particularly appealed to me was his work on the Full Light Spirit Seance, Billy McComb’s Jumbo Jest (McCombical Prediction), and the Double Penetration of a silk through cane with no readjustment of the silk.

For me, it is not so much the tricks, but the tips and advice learnt through years on the road and thousands of performances before paying audiences. Things like how to get away at the end of a show when the school principal or show sponsor wants to make a speech for which you would be expected to remain and hear. Like how to finish a balloon gig gracefully when there’s still lots wanting balloons. There’s dozens of such tips.

Loomis was great friends with Doug Henning and the book finishes with reminiscences of Henning. Both were early purchasers of the Harbin book and each built what would be some of the first Zig Zag illusions in the United States. Each made improvements and these are detailed. In talking with Ireland’s Pat Fallon, who owns three Zig Zags, he became somewhat irritated at some of the claims made, basically that the Henning and Loomis improvements became the standard. Pat had read the original article in M-U-M, and pointed out that nearly all the improvements mentioned were worked out by Jack Hughes in the U.K, one of the two illusion builders licensed by Robert Harbin to build Zig-Zag. Specifically the elimination of the bar, better sturdiness, and the catches. I think it is fair to say these were developed independently on both sides of the Atlantic.

The book is published in both ebook and ePub formats. I recommend it highly to any magician doing a stand-up or stage act/show, or any magician interested in what really goes on in the life of a working professional. You can read the full list of contents and find purchasing information at
www.michaelclose.com.