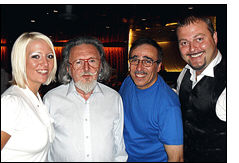 There were several great lectures this year by George Kovari with Magic effects and incredible anecdotes, Ali Cardabra with his lecture ‘It’s just a gimmick’ and a sneak preview of the lecture he will be presenting at ‘Kidology 2009’ on 8th September 2009 and Ron Escott with some brilliant and workable mentalism. Peter D’Arcy compared the Close up competition and presided over a very funny and interesting interview with George Kovari.

There were informal afternoon ‘teach – ins’ every day and splendid entertainment at night. Dain Cordean and Sophie did great comedy magic and illusions including the floating table, the snake basket, a beautiful dancing handkerchief and the smallest version of the zig zag which was most deceptive. We also enjoyed the vocal talents of Martyn Dominique the comedian Dave Kristian and musical tributes with the Balmoaral Show Company.

Dain Cordean joined us at most of the lectures and kindly organised a day when we could watch DVD’s of Kovari’s many TV appearances including that classic with Freddie Star!

This year proved to be one of the most enjoyable and friendly magic cruises ever. Thanks to organisers Geoff Maltby and William Potter.