With the sponsorship of Magicbox, the Customs House and South Tyneside Council, Martin Duffy and Karri Prinn again joined forces to stage another successful convention. Other related events take place for quite a while prior to the convention itself, in the form of shows staged around the area by local magicians. Additional sponsorship for these came from Nee Bubblegumm. 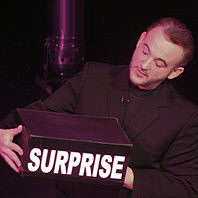 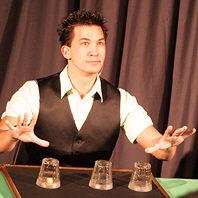 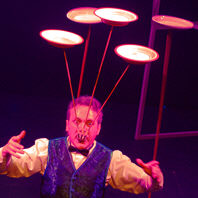 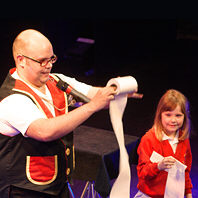 As well as the programmed events, there were additional workshops with some of the star performers. The first of these, with Doug Dymant took place on the Thursday evening, prior to the official opening.

Friday morning commenced as always with the children’s show, where the “proper” audience is brought in from schools around the area, and the magicians are banished to the upper reaches of the Customs House theatre to watch from afar. As usual, the resident host, Tommy the Trumpeter, warmed up the audience before introducing the man who would provide the bulk of the entertainment: Glasgow’s Garry Dunn. Garry works in the “holiday-camp” style, i.e. minimal props, few tricks, plenty of noise and loads of riotous comedy business, which the lively audience thoroughly enjoyed.

After the show, when the children had departed, he lectured on entertaining family audiences with virtually nothing other than a sound system and a few items that could be carried in a briefcase.

The gala show that evening, emceed by the inimitable John Archer, had an accent strongly on light-hearted mentalism with both Jon Stetson (USA) and Colin McLeod (Scotland) getting plenty of laughs along with the gasps. On the more traditional side, were the UK’s Andrew Van Buren and company, mixing spectacular magic with circus skills such as unicycling, juggling and plate spinning; and Latimer’s elegant manipulative work with cards and rings on a smoke-filled stage.

Afterwards, the delegates were bussed back to the headquarters hotel for the Midnight Show, which on the magical side featured Jon Stetson’s linking of 3 borrowed rings, followed by John Archer’s brand of mystery, music and mayhem and Darren James’s (UK) lighter comedy.

Saturday brought lectures by Nick Einhorn, Jon Stetson and Colin McLeod, as well as a full-length performance from Paul Vigil (USA) followed by a question and answer session.

Sunday saw lectures by Jason Latimer on designing and building original bespoke illusions for trade exhibitions and pushing forward the frontiers of magical effects; and John Archer presenting some of his originalities with plenty of laughter along the way.

Throughout the daytime events, the dealers were open for business. This year, apart from Magicbox themselves, there were Merlins of Wakefield, Kaymar Magic Studio, Black Cat Magic, Dave Forrest, World Magic Shop and Razamatazz. Needless to say, all the lecturers had lecture notes, props and DVDs for sale; so there was plenty to spend money on, for those so inclined.


Everyone agreed that the convention had been another roaring success for all concerned and we are all keeping are fingers crossed that it will be able to take place again next year.