The 60th Annual Blackpool Convention proved to be another great success for Derek Lever and his team. There was definitely something for every delegate and far too much for me to take in! As a result this will be only a brief résumé and I will leave others to fill in the details. 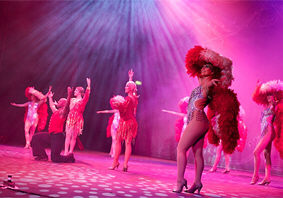 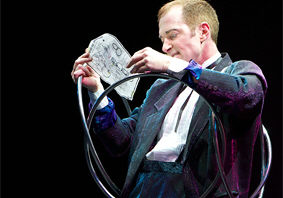 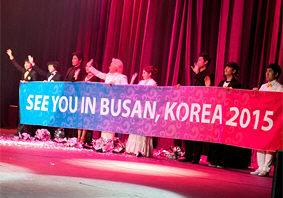 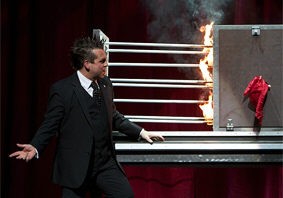 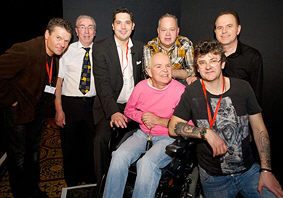 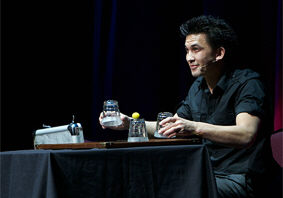 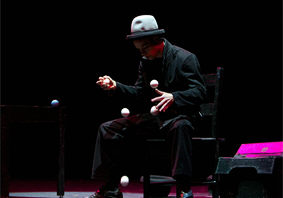 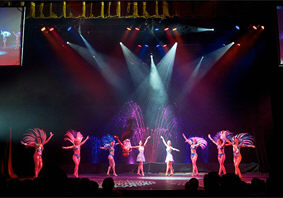 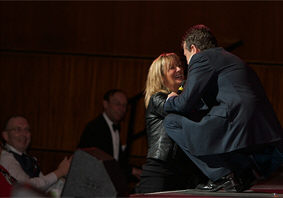 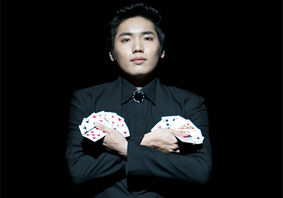 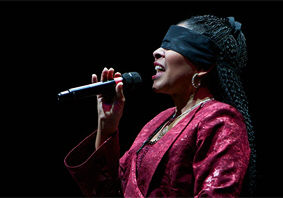 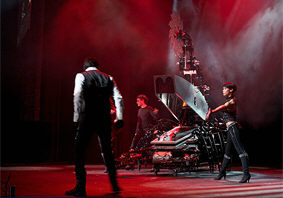 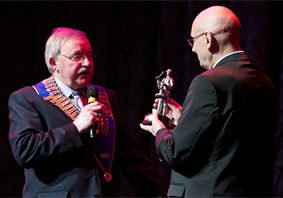 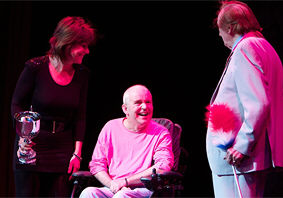 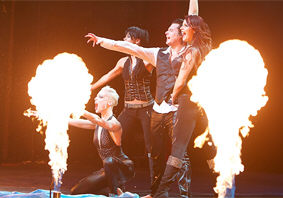 Dealers’ Showcase
The convention opened with a new feature - a dealers’ showcase. This was ideal for me as I seldom get to see much demonstrated on the stands as the place is always crowded and I concentrate on saying ‘hello’ to old friends. Alec Powell was the compère for the showcase, he did an admirable job and the event was well attended.


Loads of Lectures
The number and variety of the lectures was breathtaking. As there were 14 of them (at my count) the following will be not much more than a list of those taking part - Ian Barradell on Tenyo Magic; German manipulator Mathias Rauch; Close-up expert Chad Long (delayed slightly due to an incident that required the attendance of paramedics); Danny Cole who explained how he develops a new effect; Charlie Frye who performed and explained a multitude of gags and tricks; Michael Weber who also conducted a workshop on the following; day; Andy Nyman explained some of his amazing mental magic; Dirk Losander of floating table fame; Meir Yedid from America; Jason Latimer who answered questions about the TV hit show ‘The Magicians’; Yoo Hyun Min from Korea; Axel Hecklau with several fantastic items; Gregory Wilson whose name is synonymous with coin magic; Japanese close-up legend Ponta The Smith (spoilt by the fact that his translator was difficult to understand); and Garrett Thomas, famous ‘underground’ performer from America. There were also two Kids R Us lectures from David Ginn and Stu-Di-Do. I wanted to see David Ginn but opted for Axel Hecklau, who was on at the same time, instead (Blackpool is full of difficult choices).

Magic From The Orient
All of the three Gala Shows were fantastic. The first, on Friday night, was ‘Magic From The Orient’ - a colourful cornucopia of topnotch magic. Compère Steve Walls gave a sterling performance in pronouncing the Korean names but I cannot say whether or not they were accurate! Unfortunately I did not take notes and the running order was changed so I cannot give more than a brief description of the show. The concepts were original, sometimes surprising and performed to perfection. I liked the performance of the cheekily faced Yoo Hyun Min who took us back to the wonderment of a child. Other performers were Park Eung Kyoung with her Carmen theme, Do Ki Moon with comedy, visual magic from Kim Tae Won, general magic from Ha Won Geon and card manipulations from Lee Hun. Heading the bill was the ‘godfather’ of Korean magic Yuji Yasuda, who teaches magic in Korea. But the highlight of the evening was undoubtedly the incredible and artistic card manipulations of Yu Ho Jin. Personally, I am not into card manipulations but this guy is brilliant. He received a well deserved standing ovation.

Magic From USA and Canada

On Saturday were treated to ‘Magic From USA and Canada’ hosted by compère Jimmy Tamley, one of the most versatile and entertaining ventriloquists of all time. Danny Cole was first on the bill with several costume changes, an invisible chair and a CD routine. Charlie Frye & Co presented a quick-fire act of superb juggling, magic and humour which is brilliant but impossible to describe. Dirk Losander had a dancing cane sans the usual gyrations, a ‘zombie’ bubble routine and, of course, his signature floating table. Andost presented us with card manipulations and various effects with multi-coloured light bulbs. A ‘zombie’ routine with a disembodied hand was part of Chris Hart’s act together with a beautiful sequence featuring a torn and restored music score. The thought transference act of the Evasons was fast and inexplicable. Flames were a feature of Richard Forget’s act with a spectacular ‘zombie’ routine using flames in place of the usual orb. Jason Latimer had a lovely cups & balls routine using clear tumblers and some unusual effects with water. Last on the bill was another chance to wonder at the incredible and artistic card manipulations of Yu Ho Jin which proved so popular the night before. It resulted in another standing ovation which the young performer found rather emotional. The show was expertly compèred by Jimmy Tamley aided by his range of hilarious ventriloquial characters.

On the final night of the convention we were treated to ‘Magic From Europe’ compèred by John Martin who did an excellent job, especially when he had to ad lib as the stage was cleared of water from the final illusion of Christian Farla.


Jean Garin had an unusual act using an interactive screen. Aaron Crow made two, rather bizarre, appearances as the ‘crazy kung fu warrior’. In the first half he captured on an arrow a borrowed ring which had been embedded in an apple. His appearance in the second half featured the catch of paint ball in his mouth.


From France came Compagnie Poc with some clever juggling which also included some magical touches. Sebastian Nicolas featured multiplying balls and card manipulations interspersed with the production and manipulation of several clocks. The act of the ever popular Amethyst saw Danny walking through a sheet of glass, a quick dress change for Annette and the moving knot. Danny then thrust flaming spikes through Annette and then magically produced a second girl from the same apparatus. The second girl then entered a cage and was promptly changed into a live tiger! The final nail-biting escape threatened to perforate Danny’s head with deadly spikes. He managed to escape in the nick of time.


First on after the interval was Aaaron Crow with his paint ball ‘bullet’ catch mentioned above. He was followed by two unbilled acts. The first was Pierre Jarrow with some clever and instant changing of face masks and a ‘snowstorm in China’ effect. The second unbilled act was Jerome Helfenstein with a demonstration of the age old art of shadowgraphy but with a modern slant.


Marc Metral introduced the audience to a hilarious cast of manic ventriloquial characters and also presented a song from four human volunteers, their voices being provided by Marc. Christian Farla from the Netherlands produced girls, thrust spikes through them, and passed one through a steel plate. He also performed a substitution trunk-type transposition using a glass box. All of his illusions used large apparatus but the most bizarre was the ‘Scorpion’. In all of my years in magic I have never seen anything as over the top as this. Christian was secured in the body of the scorpion and a buzz saw lowered onto him. The saw was lifted and Christian was not in the scorpion, making a surprise reappearance in the stalls - it certainly caught me off guard. He finished with a metamorphosis illusion using a large tank of water.


Most magic shows finish with an illusion act such as that of Christian Farla but Blackpool still had some surprises to come. First was Lumina who plays the violin with a laser beam! And then came the finale with the Dolphin Company of Dancers (who also opened the show) with a routine backed by cascading fountains. Absolutely spectacular!


Awards
After the interval in the Gala Show on Sunday came the Awards Ceremony. Derek Lever, President and Convention Organiser, presented the Murray Award, a pewter statuette of a magician, to Russ Stevens and Gerrit Brengman. A popular award, presented by the master comedian himself, was the Ken Dodd Comedy Award which went to Wayne Dobson. There followed an amusing verbal sparring match between Mark Raffles and Ken Dodd when, on behalf of the wife of the late Neville King, Mark presented Ken with the Neville King Award. In return Ken presented Mark with the Neville King Achievement Award - it was an amusing and confusing sequence enjoyed by all. And, of course, Ken Dodd said a few words. No Blackpool Convention would be complete without him.


Popular Proposal
During the Awards Ceremony, there was an unprogrammed event on stage. Russ Stevens proposed to Bernice, his girlfriend of 23 years, who was sitting in the front row. Luckily she said ‘yes’!


Children's Entertainers National Championships
This was one of the many events I missed (it is impossible to see everything at Blackpool). Held in the Opera House and compèred by Terry Herbert, a superb children's entertainer himself, it featured Virrvarr, Craig Petty, David Ginn, Andy Clockwise, Mr. Wand and Stu-Di-Do.


Wayne Dobson and Friends
With the exception of the Gala Shows this was probably the best attended event of the convention. This starred Joe Pasquale with a long running gag about a chicken midwife, Michael J. Fitch (who I missed), Brian Sefton with his elegant dove productions, Duncan Trillo with card productions and his ever popular dancing handkerchief, Russ Stevens with his sophisticated card production routine, the irrepressible John Archer swallowing a balloon and, of course, Wayne himself making comments from the side.


After Gala Show Party & Beat the Wand
No thanks. Gone are the days when I used to stay up until three in the mornings at conventions. I need my beauty sleep!

Only a year to go!
Next year’s convention will be held on 22nd, 23rd and 24th February. The cost of a full Gold Card Registration which covers all three days is only £90. Everyone who registers before the end of 2012 will automatically qualify for a free magic book worth £25. A registration form will be downloadable from www.blackpoolmagic.com shortly.