Blackpool continues to go from strength to strength with a new all-time high attendance this year of over 3,400 registrants, maintaining its place as the world’s largest, most star-studded and action-packed convention. 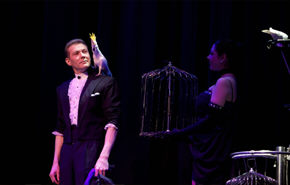 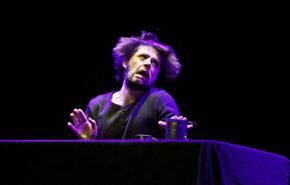 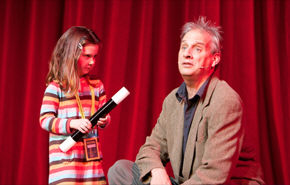 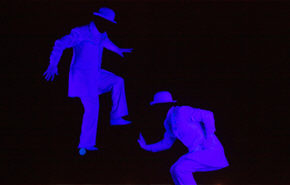 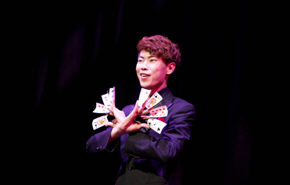 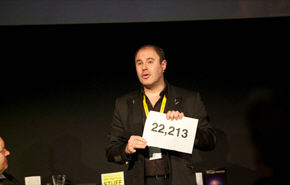 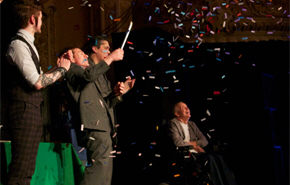 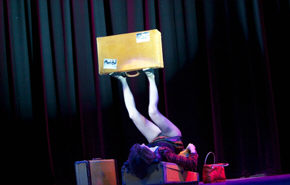 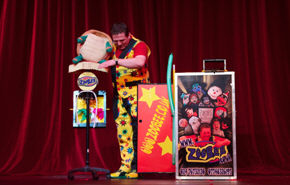 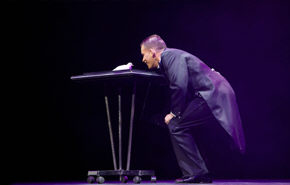 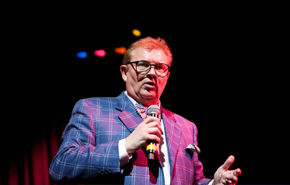 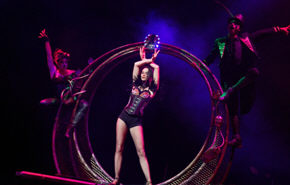 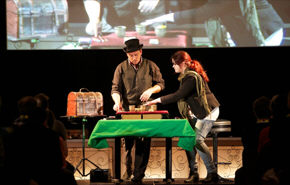 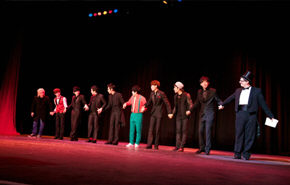 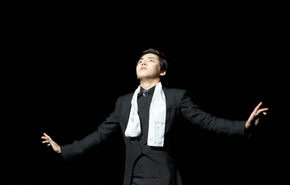 Apart from compere Vittorio Marino, whose stilt-walking gags and assorted caricature cameos added a touch of European humour, the entire evening show was a South Korean affair. That country’s principal magical coach and mentor, Yuji Yasuda, opened the bill in full Samurai costume, with an act featuring parasols. As always, with the current batch of young Korean maestri, there were striking levels of skill, creativity, originality and enthusiastic energy. Highlights included: Haon Gun’s work with T-shirts and drink cans; Ted Kim’s remarkable act incorporating projected lighting and graphics combined with manipulative skills; FISM winner Yu Ho Jin’s stylish card productions and Lee Hun, whose manipulation act brought the house down when it suddenly went into high-speed rewind mode at the finish – everything that had taken place being rapidly done in reverse (all the discarded items floated back into his hands, and vanished), Others taking part were: Kim Hyun Joon, Lukas, Nicky Yang and Yang Jae Yeong in a show that was going to take some topping on the subsequent nights.

The morning’s main event was The British Children’s Entertainer National Championships hosted by Colonel Custard aka Paul Megram. Competitors were Captain Calamity, Colin Dymond, Mr Banana Head, Puzzling Paul, David Tricks and Zoobee. The last-named was the winner, having wisely chosen to work in front of the tabs, keeping the stage area as small as possible and generating a sense of intimacy. Colin Dymond, who was runner-up, did the same. A couple of the performers elected to work on the vast full stage, which generally meant being too far back and “losing contact” with the audience. In 3rd place was Captain Calamity, who really lived up to his name when a number of unplanned mishaps forced him to rework his entire running order and make changes on the spur of the moment. To his credit, he refused to be fazed, soldiered on and won over the audience.

Lunchtime brought The Wayne Dobson and Friends Show to the Pavilion Theatre, where, with the assistance of Michael J. Fitch, Wayne introduced: Simon Lovell, Colin McLeod, Mel Mellers and Joe Monti. The accent was heavily on comedy, with the biggest laughs coming for Simon, who had been “persuaded” to resurrect his one-time signature straitjacket routine, complete with Sooty puppet and a rubber hand gag.

The International Gala that evening was emceed, somewhat surprisingly by Jay Scott Berrry, who admitted that this was a novel experience for a usually silent worker. The opening act was Antje Pode, whose foot juggling with suitcases garnered tremendous applause. Then came Dirk Losander, who seems to have appeared on one show or another at every Blackpool convention in living memory, with his bubble and table-floating act as known. Phil Cass, on the other hand, was a new face. With his assistant Philippa, he put the accent firmly on comedy, garnering much laughter and applause. In complete contrast, Natalie & Eli, a female duo from Switzerland, combined dance, multiple quick change and massive stage-filling feather flower productions in what must be one of the most colourful spectacles currently on the magic scene.

The second half opened with Philip Hitchcock’s manipulations and dove productions, leading up to a remarkable (and applause-pulling) twist on the usual cage vanish with which most such acts finish. Mel Mellers, who followed, was on top form and provided the comedy high-spot of the whole convention. In complete contrast, The Laserman (Theo Doré) of France, gave a spectacular display of manipulating light beams, which combined technology with magical skill, in an act which is unlike anything else around at the moment (until the inevitable copyists begin to crawl out). The show closed in spectacular manner with Holland’s Prince of Illusions team in a mind-numbing plethora of high-speed mysteries, which even had those, who do not usually appreciate this kind of magic, applauding and cheering.

During the show, Joe Monti and Lorenzo Clark made unbilled appearances to “instruct” the compere in the art of being funny, while the latter, at one point sang live, one of the songs he has recorded.

After the show, Magic Sam and Andrew James ran their late-night Beat the Wand gong-contest, which has now become an established feature. Boozy, vulgar and raucous, this event probably reflects the true face of stand-up magic as seen in pubs and clubs around the country. Competitors included: John Carey, Daniel Carmel, Craig Davis, George Firehorse, Liam, PJ and Doc Strange. Only 2 acts failed to beat the wand and were accompanied to the junkyard by the Steptoe & Son theme (Geoff Love’s Old Ned). The winner was George Firehorse, whose “Monkey of Truth” feature caused a near riot; in 2nd place came PJ with his disastrous attempts to perform standard effects while in full Mickey Mouse costume, which were very funny and frequently accompanied by language emerging from the rodent’s mouth that would have had any Disney suits hotlining their corporate lawyers. 3rd was Liam, whose work with yoyos really thrilled the crowd – no laughs, just pure skill.

The Master Class in the Pavilion, hosted by Jeremy Guest, allotted Phil Cass, Colin McLeod, Mark Mason, Joe Monti, Johan Stahl and Michael Webber 12 minutes each to teach one item. While Michael Webber stuck to this, demonstrating one potential of an electronic homing device when combined with the classic Invisible Deck, most of the others did more than one thing and some, like Joe Monti, with a brilliant impression of Slydini, just entertained and had fun.

The final International Gala Show was emceed by David Merry, who could probably pass himself off as Joe Monti’s brother, if he so wished. Plenty of comedy to keep the show moving along. The incredible diablo juggling and acrobatic skills of Tony Freebourg got things off to a lively start. Then followed the black-art magic of Les Chapeaux Blancs, who can be baffling at times, even though you know the underlying principles of what they do.

David Williamson went down a storm with his raccoon and a handful of children from the audience. Only he could get away with roughly manhandling the youngsters as he does; anyone else would probably find themselves in court. But with him the audience and the kids love it. A complete contrast was Galina’s balletic Linking Ring act, where the magic is very much secondary to the movement, dressing and lighting. To close the first half was Yann Frisch with his FISM-winning close-up which combines Cup & Ball magic with comedy, mime and juggling – plus a surprise finish that caught us all out.

After the interval, Derek Lever presented the Murray Award to Gay Ljungberg (the regular FISM stage director for many years), who in turn brought on the entire Blackpool stage crew, whom he described as “the best in the world”. Then octogenarian (and still working) comedy veteran Ken Dodd OBE presented his trophy to Mel Mellers, before launching into a 20-minute routine of rapid-fire gags, as only he can.

Mark & Alex plus an unnamed woman, were a team of illusionists from Germany, who kicked off the magic proper. Then came Sonny Hayes & Co (the “& Co” being Galina who had appeared earlier) with a well-worked-out, ultra-slick act of graceful comedy, which started low-key but got progressively funnier.

To close the show, came Marko Karvo and partner, yet more FISM winners, who have taken bird magic to new heights producing not only doves, but budgerigars, cockatoos and an enormous parrot, together with appropriately-sized cages. A spectacular feature is the way in which the birds fly over the audience and return to the stage; something that helped generate the excitement which contributed to their standing ovation.

For those who were still hungry for yet more magic, the After Gala Show Party followed with cabaret compered by Karl K and featuring: George Kovari Junior, High Jinx and Matthew Wright, plus close-up.

Throughout the convention, some 120 dealers were showing and selling, while caricaturist Robert Ormesher was on hand to draw portraits for those who wished. And Kenny Bowe exhibited a display of his collection of vintage playbills.

For all the stage shows, Dave Windle handled the music, Duncan Jump stage managed and Russ Brown was stage director.