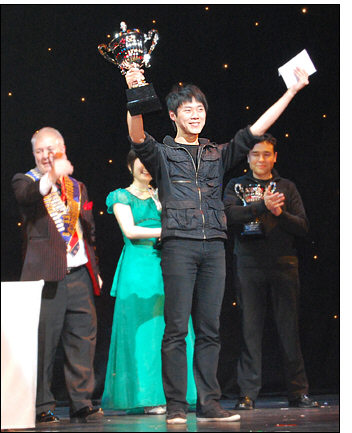 Blackpool always has an impressive line up of lecturers and this year was no exception with star lectures on the Friday from Latko, Marc Oberon, Ian Keable, Bruce Kalver, Dan and Dave Buck, and Dirk Losander. On the Saturday conventioneers were treated to offerings from Rick Merrill, Jeff McBride, Joshua Jay, Daryl, Daniel Garcia, and David Penn. Continuing the star line up on Sunday were Etienne Pradier, Rudy Coby, Michael Ammar, Arthur Trace, and Eugene Burger. In addition there were four “Kidz ‘R Uz” lectures from John Kimmons and Andy Clockwise on Saturday and Peter Greenwood and Mike Stokes on Sunday. Enough magic there to start your head spinning!

There was certainly plenty to please the close-up fans over the weekend, in fact the convention is billed as the ‘Close-Up Colossus’, not least being the International Close-Up events on Saturday and Sunday. The performers on Saturday were Rudy Coby, Arthur Trace, Marc Oberon, Michaeel Ammar, Latko, Obie O’Brien, Ian Keable and Eugene Burger and on Sunday the delegates were treated to performances from Rick Merrill, Joshua Jay, Daryl, Etienne Pradier, Dan and Dave Buck, Bruce Kalvar, Daniel Garcia and Dirk Losander. Phew!

On Saturday I missed the ‘Children’s Entertainer International Championships’ for it’s absolutely impossible to take in everything at Blackpool as there is so much going on. Later I discovered that Michael J. Fitch won the £1,000 prize and the title Children’s Entertainer International Champion 2009, and that Peter Greenwood was second, with Quentin Reynolds in third place.

A major competition was the $10,000 Intercontinental Stage Magic Championships which took place on Saturday evening. I wanted the Japanese performer Yumi to win as she has such a captivating smile but she did come second, the winner being Han Seol-Hee (photo) and third was Marc Oberon with his UV Wizard act. The originality award went to Han Seol-Lee with fast and furious manipulations of CDs which left the stage covered with discs, some of which were picked up by fans as we left the theatre.

On the Friday we were invited to a ‘Melange of Mentalists’. This will never work, I thought, but I was wrong. It was an outstanding success with the room packed to bursting all eager to see Wayne Dobson, Quentin Reynolds, Roy Zaltsman (who also compered), Ian Rowland and James Randi.

A nice touch for the Gala Show this year was amazing violin virtuoso Salene, an attractive young lady, playing the electric violin as the audience came in, and during the interval.

Compere was wild and wacky Derek Scott from Canada. He was not to everybody’s liking but I found that I warmed to him as the evening progressed. The first act was Ervan Bodiou from France with a superb bird act. He was followed by Rudy Coby with his signature ‘cutting off his extra legs’ act which was very well received. Next was Jerome Murat with his living statue act which I first saw at Blackpool about three years ago. Another act seen previously at Blackpool was the amazing interactive television magic of Tony Chapek. To close the first half we were treated to the impeccable showmanship of Jeff McBride with his masks, card manipulations and a most unusual, but beautifully presented, rain catching routine. To me the highlight of his act was the lovely misers’ dream accompanied by a boy from the audience. I first saw this is 2005, it thrilled me then and it thrilled me again at Blackpool.

Salene came on again during the interval, I liked this idea very much and I hope that Blackpool keeps something similar going in future years.

After the interval came the presentation of the Murray Award which this year went to Duncan Trillo for his work on the ever popular e-magazine MagicWeek (www.magicweek.co.uk) and to Eric Eswin, International President of FISM. The irrepressible Ken Dodd, Honorary Life President of The Blackpool Magicians Club, then said a few words before awarding the Ken Dodd Comedy Trophy to local performer Russell Brown.

An Ha-Lim from Korea then came on with slow, deliberate and artistic card productions followed by a change of pace culminating in a terrific crescendo of cards being produced at top notch speed. Speed and skill were also the attributes of French juggler, Tony Frebourg, with unbelievable feats with multiple Diabolos. The final act saw the illusions of Oscar, Renzo & Maria from Holland with loud music, flashing lights, energetic dance routines and pyrotechnics.

The highlights of the convention for me, apart from the Gala show, were the two ‘audience with’ sessions. In the first, on Saturday, my old friend Terry Seabrooke interviewed James Randi who talked about Uri Geller, fake psychic healers, and even his views on the After Life, prompted by one of the many questions from the floor. It proved to be both interesting and entertaining. Equally interesting was Hank Moorehouse interviewing Jeff McBride and Eugene Burger on the Sunday. They discussed how they met, their involvement with their teaching sessions and revealed the deep insight that both have into the art of magic and performance.

Although the length of this report has to be limited I must include mention of the ‘Ladies’ event which was attended by more men than women! There were no magicians and no tricks in the show but magic of another kind, the magic of the music hall in which the audience were treated to short films of some of the great variety acts from the past presented by theatrical impressario Duggie Chapman. I would have liked more and so would have many of the people I spoke with afterwards.

Unfortunately I missed ‘Beat the Wand!’, in which each act had to perform for up to five minutes before being voted off when the act failed to please the judges, and I also missed the After Gala Party, in spite of the attractions of Lancashire Hot Pot, apple pie and a cabaret starring some entertainers I know well, as I had to be up early the following morning.

Neither did I see Dr Sawa’s Close-Up Show, something that was high up on my list of ‘must sees’, and also I did not see much of the dealers (which probably saved me a lot of money). I did pop down to the dealers’ hall occasionally and had brief chats with some 125 dealers from around the world with plenty of eager punters searching for the ‘latest’ or a new addition to their repertoire.

Blackpool was brilliant this year. It always is, thanks to Convention Organiser, Derek Lever, and his team. Registrations are already pouring in for next year’s convention which runs from 19th to 21st February 2010. It’s the biggest and the best so if you want to be there I suggest that you log on to www.blackpoolmagic.com for more information as soon as possible.