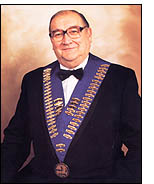 After a brief few words from IBM British Ring President John Palfreyman (photo), the Bristol Day of Magic kicked off with a lecture on entertaining children by Tony Rix. Without performing a single trick, Tony took us through everything needed to run a successful business in this field. A slide show reinforced everything that was said, from the options one can offer a prospective client, through personal attributes, fees, the format for a corporate Christmas party with the various games and disco music and ending with, what for some was the highlight - the demonstration that any rabbit is capable of waving to the boys and girls! The whole lecture showed Tony to be knowledgeable, professional and successful at what he does.

A close up show followed this, repeated in the afternoon and instructive tickets had been issued to each registrant so that one could only attend once and at the designated time. During the lunch break, the Young Magicians' Club presented a junior workshop for 10 - 17 year olds. It took quite a few minutes to clear the room of the adults who insisted on taking part but once under way, some twenty boys and girls enjoyed teaching sessions aimed at their capabilities. Tim Shoesmith took the larger, more advanced, group for some complicated card work whilst those with more diverse interests learned some rope work and some ring on/ring off moves with Mandy Davis and Simon Lane. The general opinion afterwards was that the session had been 'well cool!'

The Bristol magicians had pulled off a coup which no other magic organisation had been able to do for six years - they brought Simon Lovell over from the US just for their convention. Simon's lecture showed him to be the Simon that we all remembered - zany, forthright and a skilled performer and teacher. He opened by stating that magicians sometimes say that card tricks are boring - but it is not the tricks but the magicians who perform them; card tricks are merely tools for entertainment. The message of the lecture, however, was summed up when Simon announced 'Simplicity of Method is primary to being a good magician'. Having talked about approaching a group without scaring them, Simon demonstrated several card tricks such as Fingered Number Three, Packed Wallet (in which a card to wallet then becomes a deck to wallet), The Namer where the signed card is seen, after a lot of byplay, to have 'Your Signature' written on the back and Another Departed Point based on some work by Alex Elmsley. Simon also talked about and demonstrated second dealing, Pen through Tongue and the great value of making a paper serviette rose and NOT changing it into a real one. This was an unmissable event and those present were privileged to see this man at his best.

The Close Up event had four performers, all different and all equally talented. Shaun McCree showed us a flattened card box which changed into one containing a full deck. An ambitious card style revelation followed, each card shown being placed under his lapel until there were four - which had all changed to Aces. Shaun followed this with a rising invisible folded card which was revealed to be a selected card. A gambling story incorporated Lucifer and a contract made of parchment and the final trick showed a chosen razor blade inserted into a deck where it chopped up all but the chosen card.

Tim Shoesmith performed, as usual, with great panache and sense of drama. Using poetry and seemingly complicated prose which proved to be, in some places gobbledygook and in others profound statements, Tim took us through an origami revelation, an Ambitious Card routine, some rubber band work and a Torn and Restored child's painting. By performing most of these when standing on a table, the whole audience was able to enjoy the act to the full.

Simon Lovell used his zany anagrams of spectators' names to start his first trick - where three cards are selected and found, the last having been under a spectator's hand prior to any selections being made. Four jumbo cards formed the basis of a tap-dancing card routine before the finale - the trick I always associate with Simon Lovell, Sleight of Tongue. It is always worth the price of admission to see Simon perform and this was no exception.

Mike O'Brien was the last performer and gave a slick Ambitious Card routine which culminated in Card to Wallet. Coins across and a card matrix followed. A knife through borrowed note then led into two selected cards being found either side of the same knife when it was plunged into a wrapped deck.

I didn't actually see Patrick Page's lecture at this particular time as he was about to repeat it (with many additions) at my local club two days later. I can certainly tell you that he opened with a coin vanish inside a handkerchief and continued with billiard balls, a superb 'Do as I Do' card trick and topit vanishes. Everything was explained in great detail and Pat made it all look so easy. The main message of his lecture was 'Practice, practice, practice!' and it was evident that he takes his own advice as everything he demonstrated had immense style and polish.

The gala show took place at the nearby Playhouse theatre and tickets had been sold out for some time. The audience comprised members of the public as well as magicians; no one was disappointed by any of the acts. It was a first class event which opened in fine style with the Daniel Dean dancers producing Daniel from behind semi opaque screens which were lifted and immediately dropped. A large substitution style box was brought onto the stage and after being shown empty (tip-over style) proved to contain our compere for the evening, Mandy Muden. She found herself left alone and had to clamber out of the box unaided to the delight of the audience. Mandy proved to be an accomplished and entertaining compere who kept the show moving at a cracking pace. Colin Rose performed a short act incorporating fire and card manipulations. Every move was elegant and polished as always.

Patrick Page pattered his way through Miser's Dream and the instant retrieval of selected cards, following this with Card on Forehead and a hilarious routine with a jumbo card being selected from a normal sized deck. He then portrayed a silent act where a red-nosed magician vanished a jumbo card which kept reappearing on his back, continued with a polished rope routine and ended with colour changing gloves and some linking colour ropes.

Scott Penrose closed the first half with his act as known - yoyos to doves, manipulations, the appearance of a mimed cigarette and silks to doves ending with the doves and cage disappearing and leaving a live rabbit in its place. As a change, he then performed a Snowstorm in China effect using a snow animator, filling the auditorium with snowflakes.

The show reopened with the Daniel Dean dancers in an energetic routine which led to the reappearance of Mandy who treated us to her version of Six Card Repeat.

Duncan Trillo, whose performance is always a delight, gave us thimble and card manipulations as well as Diminishing Cards and his signature Animated Handkerchief which took a bow, along with Duncan, at the end of the act.

Simon Lovell was the act that the magicians were waiting for as many hadn't seen him perform live. It is difficult to do justice to his zany wordplay and antics but be assured that he was on top form as he romped through an imaginative Cards Across with two spectators and, after a spoof floating ball, ended with his own hilarious straight jacket escape.

Local illusionist Daniel Dean closed the show, ably assisted by Emma and the Daniel Dean Dancers. After being sliced in an appropriate box, Emma got her own back by forcing Daniel into a Twister illusion and getting her revenge. Sadly, Daniel's Six Card Repeat tended to give the whole act a holiday camp flavour which had not made itself apparent in previous performances. That apart, the illusions were strong and well executed with a professional team of dancers to give polish to the whole act.

The Bristol Day of Magic is certainly a value-for-money event with a strong line of performers and lecturers. Every year they book the best and this year was no exception.