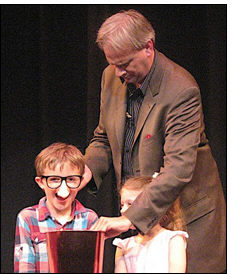 The Playhouse Theatre is a charming theatre which was the venue for the Gala show.

The Tiffany Dancers, from Southend-on-Sea, were a very proficient and vibrant troupe who opened both halves of the show with a flourish. Their first appearance was fantastic, all dressed differently but with a theme of red white and black, they captured the mood and energised the audience – worthy of Britain’s Got Talent! Noel Britten was his usual laid-back self as he compered the show and added his own touches of humour.

It was delightful to see our own ex-YMC member, Ed Hilsum, perform his well-honed and colourful dove act with his usual charm. As well as doves we saw the productions and vanishes of silks, candles and bright pink billiard balls which were manipulated with precision and that glorious smile!

Rafael Benatar, from Spain, used his gentle humour to perform Sucker Silks and a fascinating card trick which appeared to use palm reading to select cards. He ended with the Linking Coat Hanger trick on a girl who really had no idea how she was linked and unlinked to this piece of unbroken metal!

El Loco was one of the hits of the last Edinburgh Festival and used mime, unusual apparatus and a soundtrack of single line song titles or lyrics to build a story of a mad dentist who captured a reluctant patient.

After the interval, we experienced a lesser but still entertaining routine by the Tiffany Dancers. Then Jay Scott Berry showed how impressive it can be to use elegance and style when performing. His act consisted of silks, silk fountains, and the production of a goblet and a bottle of champagne. His rope work was reminiscent of Pavel, whose magic is a great influence on Jay, and the final routines of very bright and colourful lights, all manipulated in various ways, gave a delightful climax to the act.

David Williamson is one of a kind – a brilliant, hysterically funny man who comes alive on a stage and brings mayhem to everything he does! On this occasion he performed four routines. The first and last of his volunteers really made his act and gave him the ammunition for him to fire on all cylinders! He performed Needles from Mouth with a tiny, but mature, bombshell of a nurse who only wanted a hug or two! Card from Mouth followed with another spectator and then a whole row of small children were invited to the stage for Miser’s Dream. The six year old boy, wearing a Groucho Marx nose and spectacles, who declared ‘When I wear this I prefer to be called Mr Willy!’ will go down in magical history and will, no doubt, go far. David ended with his signature Rocky Raccoon and the death defying Ring of Fire climax. And the spectators’ contributions? Well – you really had to be there!

The final act was Jason Steele and Joanne with their multiple stage illusions. The opening was the stakes-through-a-cardboard-box effect and they ended with Metamorphosis. In between we saw Joanne and a floating rose, a Passing Through illusion that was somewhat confusing, a torn and restored card which followed a card on rope routine and excellent separation routine where Jason’s legs appeared in a vertical box next to his body.

All in all the whole show was a super ending to a super Bristol Day of Magic.