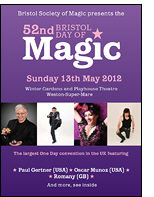 Without doubt Paul Gertner was the star of the day with his incredible technical skills and originality combined with a great personality in his performances both at the close-up table and his lecture. In the former were the card effect Unshuffled, his famous Cups and Balls routine using steel ball bearings, and a beautiful effect with an iPad whereby he interacted with his wife both in picture and action to the music of You Are Always on My Mind. For the lecture he demonstrated a novel effect with the four aces, Digital Dreams and his use of the Classic Force as well as giving valuable advice to anyone thinking of turning professional.

In the close-up show, apart from Paul Gertner were Will Gray, in top form, with Gypsy Thread using the string attached to a balloon, production of a live goldfish from a borrowed spectator’s coat, and the chosen signed card revealed in a sealed deck, and. Oscar Munoz who gave us a rope effect, torn and restored chosen card, Twisting the Aces, the Paul Harris routine of Cards Across and a coloured ball routine.

Then there was the Gala Show that included Richard McDougall in two superb spots first with his wonderful cigarette routine and secondly his comedy act with the goose; Steve Hewlett, a ventriloquist par excellence, had an array of puppets whose vocal antics had the audience rocking with laughter, and the award winning Romany dressed in black and pink and bubbling like a glass of champagne, included the production of numerous birdcages, a linking ring routine, silk to rose, Coins Across and finally Gypsy Thread. Pat Fallon was traditional using silks, candles and ribbons, Oscar Munoz included balloon swallowing and a rope routine with an assistant from the audience, and to close the casually dressed Martyn James strolled through such illusions as Lions Bride, the Assistants Revenge and Through the Eye of a Needle. The Tiffany Dancers opened each half, and the show was emceed by Kockov who unnecessarily lengthened the show to three hours by virtually performing an act between the acts. Music was provided by the Ambassadors of Jazz.


During the day other events included lectures from Oscar Munoz and Pat Fallon, Mandy Davis hosted a Young Magicians workshop, Graham Lee showed how balloon magic should really be done and 25 dealers were there to display their wares. British Ring President, Brian Miller opened the day which was organised by Amanda Farrell, Simon Lane and Dave Alexander and presided over by Jim Hoyland.