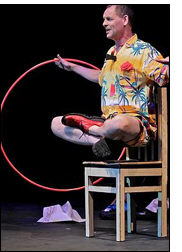 High winds and rain could not deter four hundred magicians from attending this annual one-day convention held at the Winter Gardens and Playhouse Theatre, Weston-Super-Mare on Sunday May 11, to see some of their favourite magic performed by top magicians. Under the presidency of Barry Savage, the day consisted of lectures, workshops, a Dealers Showcase, close-up and gala shows, thus making it a memorable day.

There were four lectures. Magic Olly covered children’s magic, Ian Rowland gave us mentalism with a very good song prediction, psychometry test and eating a light bulb, Gaetan Bloom showed many of his off beat ideas and Denis Behr with his wonderful long fingers blew everyone away with his superb card work that included his version of Triumph, a three phase card prediction, cutting the aces and a number of false shuffles and cuts. Mandy Davis took the young magicians through their paces, and Master Classes were held by Magic Olly and Dave Hickory.

In between there was the Close-up show. Denis Behr included card revelations and a superb Oil and Water routine; Gaetan Bloom did a prediction using cards which he then explained; Ian Rowland included the Telepathic Card and from a shuffled deck proceeded to deal multiple poker hands, and Paul Romhany gave us a time prediction, out to lunch routine, a dictionary test and the Diary Trick.

The highlight of any convention is the gala show, this time named Spellbound, and it certainly lived up to its name. Emceed by Dean Winters the show opened breezily with the young, colourful and energetic Euphoria Show Choir prior to the first magic act, that of Paul Romhany as Charlie Chaplin. Besides an excellent characterization there was lots of magic like the linking coat hanger, the reappearing drink, Cecil Lyle Hat, the floating broomstick and the largest streamer production you are likely to see. Neal Austin 9photo) has to be one of the funniest comedy magicians around with some great visual effects like the instant dress change, the torn and restored napkin, vanishing coke bottle and his take on fire eating using torches instead of flames, all of which had the audience holding their sides with laughter.

Ian Rowland did spoon bending and a card prediction effect using numbers, and Gaetan Bloom in the first of two spots gave us the vanish of the bouquet of flowers, the cut and restored mike lead and his famous card production wearing boxing gloves.

The second half again opened with the choir but this time with dancing and a touch of magic with Daniel Dean as the Prince of Arabia with the production of a girl from an empty cage. Paul Romhany returned this time as a straight magic act with lots of gags and such effects as the lovely cameo of the linking coat hangers with a little girl from the audience, and a prediction effects with three spectators, and Gaetan bloom gave us a somewhat overly long revelation of a card from a kiwi fruit inside an orange inside a grapefruit.

As good as all this was, the star of the show was undoubtedly Daniel Dean with Destination Dance. It was slick, beautifully costumed, entertaining with some great illusions involving dance movement. The girls vanished and appeared in quick succession, were sliced and floated. There was the substitution trunk, the Cube, and the comedy Cups and Balls routine using the girl’s head appearing under the cups. This time though the effect was different for at the end in that when the curtain surrounding the box was pulled away the girl had vanished. In a front of curtain effect Daniel gave us a three ring Linking Ring routine. It was a great finish to the show, and Daniel can take his place among the very best of illusionists.

Our thanks must go to organisers Amanda Farrell, Dave Alexander, Ozzy Dee, Simon Lane, Jon Billett, Chris Payne and Bob Chapman for making it all possible.