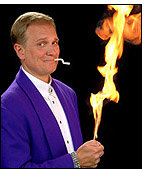 ‘It was Magic!’ This was the comment of Terry Herbert as this years Convention of the British Ring of the International Brotherhood of Magicians held in Eastbourne closed. All the performers were superb, the lecturers most generous in the routines presentations and advice they gave, both stage and close-up competitions keenly contested and a Dealers Exhibition catering for everybody’s needs. In a word it was a triumphant. Acknowledgement for its undoubted success must go to its overall organiser John Pye, who with all the officers of the British Ring and the Ring’s Stage and Musical Directors gave months of dedicated work to collate and stage a well-balanced programme of events. Paul Stone must be congratulated on producing two of the best stage shows ever seen at a British Ring Convention and arranging for a whole galaxy of the world’s greatest magicians to wow and entertain the 1322 registrants who attended. 1322 came, they saw, they participated and they left Eastbourne on Sunday fully satisfied with what they had witnessed.

To name the highlight of the Convention is virtually impossible. There were so many! It comes down to individual choice be it a stage or close-up performer. It was the same with the lectures and workshops. This is not surprising since there were 32 stage acts, 6 close-up workers and 11 lectures/workshops. What a delight it was to hear Michael Close boogie-woogie the ivories so majestically.

What else happened? Mark Raffles with the untiring support of his wife Joan completed their year as President and President’s Lady endearing themselves to everybody not only at the Convention, but also the many that they meet during their journeys around the country. At the conclusion both handed over their Chains of Office to the incoming President John Styles MBE and his Lady, Barbara. The British Ring is proud to have John as its President for the current year. We know throughout his year he will do his utmost to promote the prestige of the British Ring and advance magic as a performing art. At the Annual General Meeting it was proposed and accepted that the President Elect would be Derek MacFaull the present Chief Welfare officer and Ring Chaplin. Southport was approved as the venue for the 2007 Convention, the dates being the 11th to 16th September.

For the Shield Paul Dabek was a worthy winner giving an action packed magical performance with a projected personality, which reached out to the very back of the Congress Theatre. He has now completed the ‘double’ having previously been a winner of the Young Magician of the Year of The Magic Circle. A very bright future in the world of entertainment is predicted for this young man.

Scooping two prizes was Joe Ray, Grandson to Geoff and Pat Ray former winners themselves of the Shield. Not only did Joe come second in the competition taking The Theo Speaker Cup but also emulating his Grandfather by winning The Dittia Shield for manipulation. Geoff and Pat were so very proud when in addition to Joe’s awards it was announced that son Paul was the recipient of the Tom Harris Cup for Comedy. That Friday night was a great time for celebrating for the Ray family.

There was another double winner, Graham Lee. With his innovative act of presenting standard magical effects using not the recognized props but balloons. This hilarious act took Graham into third place and The Alastair Wand and won him The conventioneers Trophy for originality. Regretfully there being no lady competitors The Craig Trophy for the best Lady performer could not be awarded. Come on ladies make sure some of you compete next year at Southport and save John Palfreyman having to have the custody of it for the year!

It was the first time the organisation of the competition had been undertaken and introduced by Shirley Ray and what a splendid job she made of it bringing in several of her own innovations. She resurrected the practice of many years ago by having the names of each competitor being carried across the stage by a glamorous lady magician and then displayed on a stand. This was enhanced on three occasions by the task being undertaken by Peter Greenwood in drag. So successful was he in this role he is now open for an engagement as Dame in Pantomime.

It came as no surprise that Marc Oberon had won the Zina Bennett Cup. He had given a faultless display using cards, coins and a key routine cumulating with the production of one of jumbo proportions. Chris Power took second place with his laid-back performance of cards and a final production of coins through a diaphanous square. Steve Dela was third with his cups and balls performed to music and intricate card work. For the first time The Rovi Trophy was presented to Steve Dela for exhibiting a high standard of skill with playing cards in an entertaining manner. Organiser Bryan Atherton is to be congratulated in the exemplary manner in which the competition was run.

Each year The Craig Trophy is awarded to the dealer presenting the most attractive display, the judging being done by a display manager from one of Eastbourne’s Department Stores. This year the Award went to Colin Rose’s Five of Hearts Magic Productions.

It was very gratifying that many of you remained to see the Stars of the Future Show on Sunday morning. There were excellent performances from all the participants and your appreciation must have given them all a great boost. Thank you for stopping and supporting them.