A Report by Matthew Field, Editor, The Magic Circular 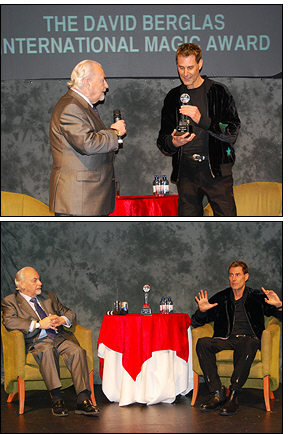 A fabulous line-up of magicians from around the world, a close-up magic competition, lectures, close-up and gala stage shows, a Dealers' Fair, a surprise from the great David Berglas and camaraderie with friends old and new were the highlights of the 37th International Magic Convention presented by the MacMillan family at the Shaw Theatre in London over the weekend of November 28, 29 and 30.

Over 500 magicians were in attendance and events began on Friday with a performance by 'The Cheat', card expert Richard Turner from America who presented an entertaining gambling routine with two assisting spectators. This was followed by an interview with Richard conducted by myself. A stand-up comedy show was next, with warnings that some material might be 'unsuitable for the easily offended'. Compère was comedian Phil Butler who introduced Belgian magician Rafael, US magician John Lovick in character as 'Handsome Jack', and US comedy juggler David Kaplan. Butler did a turn himself in which he had talking children's toys say naughty words.

Briefly: Troy von Schreibner (UK) performed a card act including the Cannibal Cards; Vittorio Belloni (Italy) did a Matrix routine, repeating it with clear cards; Woody Aragon (Spain) performed an Oil and Water routine leading into the Call to Colours (dealing one, two or three of each colour at a time), ending with a rainbow-backed deck surprise finish. Kolos (Hungary) started with card transformations, moved into a linking jumbo card routine, and ending with a two-cup and balls routine. Igor de Ruitz (Italy) portrayed a mad scientist who used a Pinocchio doll to accompany a coin box routine. Tatsuya Mishimagi (Japan) dressed a spectator as a magic princess and had a deck of card diminish in size, except for a selection, then coins and a coin purse shrank, and the magician himself finally, comically, shrank to the size of a hand puppet. Shawn Farquhar (Canada) had a spectator choose and sign a card, which vanished. A sealed deck was produced within which was found the signed selection, in its proper new-deck-order position. Shawn then performed a Cups and Balls routine finishing with totally solid cups. Matthew Wright (UK) concluded the first half with a flash of fire and a theme involving witches. He performed a piece-at-a-time Torn and Restored Card, a 3-Fly effect with one coin visibly floating to join the other two, and the Cups and Balls.

After the interval Gary Charm (Hong Kong) produced a bottle and glass and showed how his mobile phone diminished before transforming into a huge old-fashioned stand- up phone, and finally produced a live butterfly. Dynamo (UK) had five audience members choose numbers, then showed they were the numbers on a lottery ticket he had purchased earlier. In his closer a spectator gave Dynamo's wallet to someone in the audience – in this case, it happened to be Andy Nyman. Dynamo showed he had a credit card with Andy's name on it, a photo of Andy's wife, and a previously signed card was found in the wallet. Toto (Japan) heated a coin to try and bend it, but the lighter bent instead. He humorously performed Crazy Man's Handcuffs (Linking Rubber Bands), removed his thumb and showed it was stuck on his cheek, showed a 3-Fly routine, and finished with rising cards in glass. Johan Stahl (Sweden) did the old pen-behind-the-ear gag, then vanished the pen and it appeared behind a spectator's ear. He also performed a Chop Cup and finished by pouring a cup of coffee from the Chop Cup. Giacomo De Carlo (Italy) used a football theme adapted to cards, producing the four Kings and having the backs change colour to represent France and Italy in a match. Kiko Pastur (Spain) spread a deck of cards on the table, blew a puff of air, and the four Aces emerged from the spread, then he vanished cards which appeared beneath a mirror under a spectator's hand. Finally, René Frotscher (Germany) talked about the cliché of the German's lack of a sense of humour, vanished a ketchup bottle and reproduced it from the crushed bag, except the bottle (real glass) was twisted. He also did some card routines, finding a signed selection with the cards mixed in a paper bag, and ended with a signed banknote in tomato.

Following the competition there were three lectures hosted by James Freedman. Richard Turner talked about advanced card techniques, David Kaplan showed how he manages his music cues creatively, and John Lovick taught his bottle production, a bill switch and some card tricks.

Saturday night at 8.00 Richard Kaufman, the author, publisher of Genii and card expert gave the first of two special workshop sessions for which 15 convention-goers paid an additional fee. He showed details of the Pass, discussed finesses on the Double Lift and taught several tricks. The second workshop was held on Sunday morning at 9.00.

Saturday night also saw the first performance of the Gala Show which was repeated on Sunday. Since I saw the Sunday show, we shall deal with it in its proper place.

Sunday is the Dealer's Fair, with dozens of magical merchants from the world over displaying and demonstrating the latest miracles. At 11.00 a Close-up Show was held in the theatre. John Lovick (USA) did some tricks with banknotes and a great Confabulation prediction routine with two spectators. Peter Samelson (USA) showed his poetic touch, including a Wild Card based around the movie 'Invasion of the Body Snatchers', a burnt and restored piece of tissue paper themed to the Phoenix myth, coins which appeared in a smoke-filled glass, and the Snowstorm in China. Denis Behr (Germany) did some exquisite card work, including a trick in which a rubber band located the four Aces, a four-card location from a shuffled deck, and Oil and Water concluding with Denis punching a hole in the cards, fastening them together, and still having them separate (a version of Angelo Carbone's 'Out of Order' effect). Then the entire deck was shown to have separated into red and black, but when shaken, they were shown to be completely mixed. Andrew Goldenhersh (USA) performed some impressive finger manipulations, turned an origami butterfly into the real, living thing, showed a lovely Matrix effect and concluded by swallowing a handful of needles and some thread and producing the strung needles from his mouth.

Next up were the Star Lectures. Denis Behr began with material to please the serious card student, including a great gambling trick, and he showed how to displace cards so that during the course of performing other tricks they end up in your memorised stack order. Andrew Goldenhersh warned that he would not teach tricks, but instead taught finger and hand exercises and techniques to make your character in performance more real. He also played two modern guitar pieces. Peter Samelson spoke of his use of stories to engage audiences in his magic, and taught his Burnt and Restored Napkin routine – distributing napkins to the entire audience so they could work along with him. He also explained the Ring in Box effect he includes in his stage show.

The Berglas Foundation's International Magic Award is presented for services to magic. Last year was the inaugural year, and the award was given to the MacMillan family. This year the crowd was buzzing with anticipation, and they were not to be disappointed. Magic legend David Berglas introduced the winner for 2008 – Uri Geller. Mr. Geller was very appreciative and said he would candidly answer questions from the audience, first explaining that he took to spoon bending because he had bent a spoon when he was a child and did not know how it had happened. He admitted that, in retrospect, he might have allowed the enthusiasm of youth to cause him to say things he now regrets, but he said he truly does believe in inexplicable things, including the ball of glowing light which appeared to him when he was five-years old. He said he was proud to receive a magic award from the great David Berglas, and when pressed said that he had never read a magic book.

The Stage Show Gala on Sunday evening, a repeat of the Saturday presentation, was preceded by close-up performers in the lobby of the theatre. The show is open to the general public, and many non-magicians were in attendance. Noel Britten was the compère once again, and his material was hilarious – a perfect accompaniment to the magic and variety acts on display. Soma (Hungary) opened the show with a mobile phone-themed act. He manipulated, multiplied and vanished these by the dozen. David Kaplan (USA), is a comedy juggler and he is hilarious with an act featuring the misadventures of a bowling ball. Peter Samelson (USA) performed the Gypsy Thread, a story featuring two spectators and the Mutilated Parasol, and a ring which vanished and appeared in a ring box, except it was the wrong ring. The ring in the box belonged to another spectator, but eventually the rings were sorted out. Rafael (Belgium) performed the first of three turns in the evening, this featuring a quick-change sequence with an assistant.

After the interval Robert & Emiel (Netherlands) began a performance without an introduction. The curtain opened on a young man curled up on a stool, as an announcement introduced him as a boy trapped in a man's body. This strange second-sight act had the man on stage, Robert, naming things pointed at by his partner, Emiel, with virtually no speech on Emiel's part. Rod Laver (UK) was hilarious with an act in which he stuffed ping-pong balls in his mouth, juggled them (still using his mouth) and even played a tune on gin bottles filled with various levels of liquid. Red Hat (Korea) performed an act in which masks appeared, multiplied and disappeared. Andrew Goldenhersh (USA) produced a live butterfly from a tattoo on his arm and called a young boy on stage to help with the Miser's Dream. He finished with a straitjacket escape, producing from within it two chickens to conclude. Rafael entered for his second appearance looking like a three-foot tall dwarf carrying a trunk. Transforming to his full size, he floated a disembodied head which he attached to a woman's headless body, and she walked away, now complete. For his final turn, Rafael had his assistant enter a clear box and swords were pushed through to trap her within. As the box was momentarily covered with a curtain, the assistant appeared free and Rafael was in the box – except it wasn't Rafael, it was compère Noel Britten, dressed in a costume identical to Rafael's.

This was a first-rate show in every respect, with a perfect variety of acts to please any audience, and it certainly pleased the one in the theatre on Sunday.

The International Convention was formerly called Ron's Day in honour of Ron MacMillan. The expanded convention is now run by Ron's son Martin, owner of the International Magic Shop in Clerkenwell Road in London, sister Georgina and Ron's widow Teresa, and they and their staff do a fantastic job.

Everyone I spoke to had a great time and was looking forward to next year's convention, which takes place, as always, on the last weekend in November.