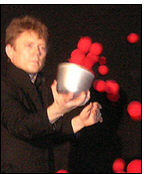 It is magic in itself how this fledgling one day convention can attract over 300 magicians and young aspirants from all parts of the UK as it did on Sunday, September 29 at the Ramada Hotel, Sutton Coldfield which now in its fourth year it just gets better and better. Organised by David Penn, Craig Petty, John and Mark of the Birmingham based World Magic Shop, the first lecturer of the day was Tom Wright a young guy from N. E. Lincolnshire. An expert in the use of threads, he showed various ways that apparent miracles could be achieved by their use. Effects like Chill, sliding a ring off a wand, a note that floated inside a glass topped with two cards and then jumped out, Psychic Touching and Oblivion a coin effect for which he has become known.

Mickael Chatelain, a popular close-up card magician with Paris restaurant patrons demonstrated that with the unusual use of special faked cards so many effects were made possible without the use of highly technical skills, like the Three Card Monte, a chosen card revealed between two cards, the Jokers changing to the Queens, and a version of Ambitious Card. He finished with a very convincing torn and restored card.

The star lecturer was undoubtedly Tom Stone from Sweden, whose application of the misdirection principles laid down by John Ramsay and Slydini were evident in such effects as the Sucker Egg, a beautiful coin routine, a version of the Ace Assembly using Jokers, and the Cups and Balls. He finished his spot with his well known Sponge Ball routine climaxing with the production of two hundred balls.

An added event was the David Penn interview with Ben Hamlin. This young charismatic magician starts a series of six one hour specials on ITV2 on October 10. These will not be your normal magic shows, but prank magic and stunts rather reminiscent of the late Jeremy Beadle. As part of the interview he showed various clips which all looked a lot of fun. The shows are not to be missed.

The whole event was enhanced by some of the best camera work by David Penn using a mobile camera who with the aid of a giant side screen was able to convey to the audience the smallest technical detail. Gianni Abruzzese was on sound.

There were five dealers headed by The World Magic Shop, all of whom did great business, making it a truly magical day.