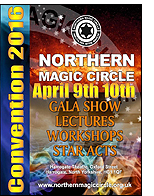 On April 15 1956 seven magicians met at the Scotch Corner Hotel, Yorkshire and formed the Northern Magic Circle. Sixty years later, this friendly society marked its Diamond Anniversary with another successful convention, set in the historic Harrogate Theatre. The weekend was dedicated to Paul Daniels, whose recent passing is so sorely mourned, Paul being the N.M.C. Honorary Vice-President.


Early Saturday morning after registrations and opening of the dealers (Merlins of Wakefield, Devine Magic [Su Jayne] and Adrian Sullivan) President Danny Hunt welcomed the small number of early birds, declared everything ‘open’ and we were off. First a new item, Close-up Competition for magic clubs affiliated to the Northern Magic Circle, of which there are close to twenty. So why only three clubs fielded an entrant remains a mystery. Rick Tynan for Mahatma Magic Circle (Liverpool) opened with smooth mini Linking Rings and varied signed card locations, climaxed with the card appearing in his shoe. For Ipswich M.S. Wayne Goodman also had multiple card locations, delivered with skill and lots of humour. Finally, for Derby M.C., Paul Sharp also had chosen card revelations, twisting kings (a la Aces) and a book test.


An unscheduled lecture was slipped in next, by Noel Qualter, of quiet personality but devastating magic. This included a borrowed £20 note vanished, to reappear as a photo on an iphone, the number verified before being ‘restored’ to its owner. Ambitious Card had the Qualter treatment to great effect; a selected card visibly passed through a clear sheet of Perspex, a borrowed coin was ‘burnt’ in water, and a celebrity name freely chosen from a deck of 52 (genuine!) names had that person’s photo in Noel’s (thin!) wallet. It was an entertaining, instructive session.


Two other lectures, by Morgan and West and Andi Gladwin, I was unable to see. The ‘Victorian Time Travellers’ I know feature the process for the creation of ‘characters’ and the work involved. Andi Gladwin is skilled in sleight of hand and clever presentations, but also featured I’m told a neat idea for a Magic Square.


Saturday pm brought a reasonable mix of children, mums, dads and magicians for the Children’s Show hosted by clowns Clivo and Jeanie. Brian Lead opened the show with a string of comedy props, outrageous puns and cheeky puppet dog and monkey. In striking Merlin outfit Doug Gregg with young volunteer assistants romped through a colourful, energetic act with a wilting flower, a train, and Louis Histed’s Who’s Who at the Zoo from Abracadabra magazine.


In the second half Jack Dent was very good, very fast, very loud but highly entertaining. A small boy left the stage having created spots on silks, conjured up sweets and caused havoc with multiplying wands. Jack was seen in a recent edition of TV’s Don’t Tell the Bride.


To close, Destiny, the teenage girls current holders of The Magic Circle Young Magician of the Year title, with illusions, Linking Rings, flower and snowstorm productions.


Saturday evening was devoted to the N.M.C. Junior Section. First a competition, this year only three entrants. Taylor Nicou, very young (11), confident and with promise, did a miscellaneous set including Chase the Ace, silk productions and – made a fully costumed Genie appear who was then suspended on a magic carpet!


Joseph Mein, in an older bracket (14), was stylish with card routines including Cards Across, and vanished bank note discovered in a pen. Sufficient for him to win the trophy plus cash prize.


The third competitor was Julian Gibson (13) who introduced us to his Uncle Shreck who did card tricks, and himself spent time not finding a selected card until the end of the act!


After an interval, N.M.C. Secretary Brian Lead announced awards and President Danny Hunt made the presentations. The Frank Richmond Award for 33 years membership, to Phil Hanson (not present) and Brian Lead (who was!). The Eric Bland Trophy for best contribution to Northern Lights (N.M.C.’s magazine) to Ray Roberts. The Close-up winner was Paul Sharp for Derby M.C. The special President’s Award for services to the Northern Magic Circle went to Junior Section Organiser, former Editor of Northern Lights, Registration Officer and general dogsbody (!), Su Jayne. Well deserved and well applauded.


The following show by thirteen of the juniors paid homage to comic book Super Heroes, including Superman, Spiderman, Wonderwoman, Joker and more; Taylor Nicou’s Incredible Hulk had to be seen! The magic ran the gamut from cards to rope to illusions, including producing the entire cast in the finale. The show devised and directed by Su Jayne. Special mention must go to the ‘boys in black’: stage director Neil Roberts, assisted by ever-willing ‘hand’ Graham Colven, and sound technician Sheriton Swan. These three active in all stage shows and some of the lectures.


Sunday Lectures and Gala Show
First event early Sunday morning was the N.M.C. AGM, which cannot be reported except that Robert Temple, young, energetic and personable hypnotist and magician was confirmed as president for 2016/17, with Rick Tynan as President-Elect.


In the History of Mystery slot, first lecture of the day was by Donald Bevan! For this I meandered through the life of Goodliffe the Magician and Abracadabra, the World’s Only Magical Weekly, running for 63 years. If reaction and comments are anything to go by, this was well received. My thanks to John Russell, Neil Roberts and Sheriton Swan for technical assistance.


Mike Shepherd next conducted a lively auction, proceeds to the Northern Magic Circle Juniors. Some excellent items of offer here, some bringing good prices, others almost given away. I noted one character successfully bidding for an attaché case filled to bursting with magazines; then trying later to give it away!


A lecture by Oliver Tabor followed. This was for stage performers and included valuable advice, techniques and methods for producing and manipulating bubbles. Oliver’s handling of doves was exceptional, including how to train birds, how to house them and the tip to always try to use the same bird in the same effect every time. This was top rate information from an all-round professional.


After lunch Luke Jermay lectured – and what a lecture! This guy is well known to be at the top of mentalism, and he showed why. His ideas on riffle forces, Tossed Out Deck, Living and Dead Test, Flapless Window Envelope with excellent body movement to assist glimpses, an incredible book test and explanation of Touchings, where three people swear they were touched by Luke – but were they? – were off the planet! We were reminded that many effects used by mentalists came not from magicians but from spiritualists. An excellent session which deserved a larger audience.


The first of six acts was 2 Minds Combined, into a pleasing and entertaining shadow routine featuring numerous animals and characters including Donald Trump and Simon Cowell, with a final rabbit from hat production.


Katie Trickett, young and glamorous, produced varied drinks from water and cocktail shaker, to be sampled and approved by some of the audience, including the Mayor of Harrogate. For some of us ‘oldies’, memories of Milton Woodward and Kalanag!


Morgan and West closed first half as ‘Victorian Time Travellers’, suitably dressed. To clever cross patter, a chosen card passed from one packet of ten to another (just one, not three!), a borrowed ring vanished, to reappear on a length of ribbon threaded through a paper bag, and Morgan, his back to West and an audience volunteer, successfully divined selected coins dropped into a glass tumbler, purely by sound. Believe that and . . . ! Clever and novel.


Second half opener was Oliver Tabor, a ‘musician’ to whom magical things happened. His violin shrank, musical notes appeared at his fingertips, music score revealed a dove and other birds unexpectedly and magically appeared. Placed into a cage, this vanished to reveal a large, white cello! A stunning finale. This act has class, humour, novelty and skill.


The Destiny girls returned with different illusions. First a cage of fire quickly covered revealed 15-year old Sara Jade reclining, as any ‘big cat’ would. Later she ‘sank’ into a closed pyramid to be impaled (assuming she was actually still there) with fire rods at impossible angles. Luckily the girl emerged unscathed.


To close the show, John Archer ‘danced’ on stage to beguile the audience with fast patter lines. All accompanying an intriguing Do As I Do card routine and his outrageous tale of a balloon, two little girls, dressed the same, living in identical cottages, leading (eventually!) to the revelation of a prediction. Oh yes, finishing with pathos as John sang and played his ukulele to tears! Entertainment all the way.


So ended the 60th anniversary convention of the Northern Magic Circle. The Circle welcomes new members (www.northernmagiccircle.org.uk). Check out eventual details of next year’s convention and aim to be there.