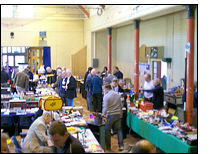 Held at longtime venue, Millfield Community Centre, in uptown Peterborough, this, is not a “pure” convention. It’s a Sale and Exchange, but with added style. Loadsastuff to buy and sell plus lectures, workshops, car-boot dealers, “proper” dealers, plenty of fun and a plentiful supply of Magic’s long-pocket purchasers-in-prospect. And all at price we can afford.

Traditionally, the society’s president opens the proceedings, then hands over to a guest celebrity star to declare the Day officially up and running. This year there was a mega-drastic change. For reasons I was never able to discover, current presidential incumbent Josh Miller sidelined himself and the presidential spot was filled (admirably) by Keith Downs. Keith is one of the power-driven powerhouses behind the Peterborough Society, which is saying something because unlike most societies Peterborough has several driving forces.

Anyway I did what was required and then it was time to start selling and exchanging.

The first of three workshops followed hot on the heels of the official opening and kick-starting teaching duties (ahem) was this reporter Well, the least said about this the better. Ditto the other two sessions. Dealing with cards, they were officially titled The SOS Session, and indeed were the Same Old Shiffles.

Following this first workshop, which was surprisingly well attended (numbers decreased as the day wore on) there was ample time to spend a few bob (that’s shillings, not pounds) we were on our way with the first proper lecture of the day. This was from Christian Lee. Smooth, clever, skilful, entertaining and “What a nice chap” were at the heart of the comments I heard. This was good to hear, of course, but was particularly surprising, because according to information received it was his first-ever lecture.

Then came lunch and another chance to seek out bargains. Incidentally, the catering is low-key, but wholesome and best of all inexpensive.

The Day’s second proper lecture came in the afternoon from Martin Cox and this received the same plaudits as Christian Lee’s lecture.

What struck me particularly was the down-to-earth demeanour of both lecturers. The Peterborough Day is meant to be a fairly laid-back social affair, promoted by enthusiasts for enthusiasts. The proceedings are enhanced by a chance to see some decent magic and buy or sell some stuff. Both these lecturers entered into the spirit of things and seemed at home with everything going on around them. Completely down to earth and approachable.

As well as the car-booters, mixing and mingling with recognisably “official dealers” were longtime stalwarts Merlins Of Wakefield, Magic Books By Post, Alan Astra Hocus Pocus, Zane’s Magic, Gary Bryson, Mick Hanzlik and Albion Magic. Since, as always, this is largely from memory, I’ve probably missed someone.

Walt Lees, formerly of Abra, now of Mystery Magazine was present, complete with high-powered camera, was clicking away like a goodun.

It’s a full day, I say ever year, because it is—more so than usual this year for me, with the workshops taking up a fair slice of things. As always with anything in the fun category, it passes almost before you know it’s begun; all over for another year. As always, good value, good magic, good company. Not, perhaps, as glitzy as a certain west coast bash, but no less worthy and a welcome addition to the magical calendar.