HAMLET: Come on, Sir
LAERTES: Come on, my Lord (they fight)
HAMLET: One?
LAERTES: No!
HAMLET: Judgment!
OSRIC: A hit, a very palpable hit. 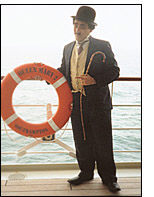 This decision by Osric (making it 1-0 to Hamlet) came to mind as a very appropriate way to describe the recent Repro Cruise which was held on Queen Mary 2.

And why, you might ask, was it such a hit? Well, for a start the magic was good. In fact the magic was very good with lectures and presentations given by Eric Sharp, George Kovari, Ali Cardabra, Walt Lees, Mel Moore, Ron Escott and Peter D’Arcy.

But the success of the event was not only down to these luminaries of the British magic scene but also to the conventioneers themselves who so readily performed, shared and explained their own magic in the many impromptu sessions so skilfully organised by Walt Lees. Participation was the key word and this was in evidence right from the start. The Magical Beetle/Pocket Trick Drive, appearing for the first time on the Repro programme, was organised by Rex and Janice Stott and proved an excellent ice-breaker. It is a brilliant idea which had its origins in Middlesbrough and it allowed twenty participants to perform to all their fellow magicians and also for non-magicians to sit at each table as spectators. Indeed, a couple of passengers, intrigued by the gales of laughter coming from one corner of the room where George Kovari was doing his own “Perplexing Pyjama Cord” routine, asked if they could stay and watch. Once they said the magic words to Geoff, “Can I get you a drink?” they were welcomed as honorary members of the group.

The next day we had lectures by Paul Buonocore (aka Ali Cardabra for the rest of this report), and Mel Moore and a talk by Peter D’Arcy. Ali’s lecture was entitled “Wota Lotta Bottle” and he showed, inter alia, some extremely clever ideas using clear plastic bottles Ali must be one of the most creative and inventive characters on the British magic scene. Afterwards, he told me that his hero and inspiration is Arthur Setterington and I’m sure my friend Arthur will appreciate that compliment. Mel Moore demonstrated the fascination of magic squares and provided some excellent notes to accompany this talk. As the cruise went on I began to build up an impressive collection of lecture notes, all provided at no extra cost to the conventioneers by Geoff Maltby. Later that day Peter D’Arcy amused us all with his experiences as a toastmaster at some of the top events on the London scene and it was easy to see how his composure and confidence made him so much in demand

The following day Walt, in a new lecture, shared with us some magical gems of which his “Chop Cup for Mugs” and Slynada’s Balls were particularly impressive and Ron Escott gave us full details and explanations of the baffling mental items which he performed. I have to admit that due to a thirty years’ gap in my magical background I had never seen Eric Sharp perform or lecture. It was a real privilege to see a master of his craft at work and it is also easy to see why so many magicians who work with children owe their inspiration to him.

When in port Walt arranged some “free and easy” sessions. Lasting about an hour, for many these were one of the highlights of the cruise. During one of these sessions George Kovari showed a video of some of his television appearance including some priceless footage of an hilarious bullet-catching routine involving Freddie Starr and Dale Winton.

There was a large audience, including several invited outsiders, for the conventioneers’ stand up/ close-up competition. The thirteen participants including lady magician, Brenda Trowell, had 5- 6 minutes each and offered a wide range of magic using cards, coins, rings, ropes, cups and even an identity card. The eventual worthy winner was Ali Cardabra or was it Inspector Clousseau? The following request to a volunteer had to be heard to be believed - “I will sterp when you say sterp”. The panel of three lady judges made up of Peggy Lano-Moore, Peg Warman and Susan Kovari gave Ron Escott, Reg Allen and Bruce Jordan honorable mentions. Bruce particularly caught the eye with his version of Codology using small clowns instead of fishes. George Kovari, thankfully, (as the originator of the effect) looked both amused and impressed. Walt ended the afternoon with Nap Hand, made all the more challenging as two out of the three non-magician “volunteers”, unknown to Walt, spoke little English.

The final afternoon was made memorable by Ali Cardabra’s illustrated lecture “Charlie and Me.” This was an affectionate and informative tribute to the life of Charlie Chaplin. As he talked Ali gradually donned costume and put on make-up to become Charlie himself! He then did two or three effects in character. This gained a terrific response from the whole audience.

By now you will have realised that I had a fantastic time and I haven’t even mentioned the never-ending supply of magical tricks, freebies, memorabilia, puzzles and competitions which arrived daily in our cabins. (One free trick in particular, “Shamloch”, was a real stunner. You can find it written up in July’s The Magician. Perhaps if you say the magic words to Geoff he might make it available to a wider audience.) A spirit of generosity pervaded the cruise with Bruce Jordan and Kovari providing extra gifts for all the participants. As ever, Geoff and Will’s organisation was superb throughout. Will’s ladies were royally entertained at their coffee/sherry mornings with Charlie Chaplin presenting roses and serving drinks. The events were also graced by the Commodore’s wife and Amanda Reid, the Queen Mary’s Cruise Hostess, who chatted animatedly with all the guests.

The end-of cruise party held in The Winter Gardens was attended by Commodore Warwick and his beautiful wife, Kim, who presented a host of valuable prizes including a special one to Peter D’Arcy for his particular contribution to the convention. “Peg’s Drawers”, a raffle organised by Peggy Lano-Moore, raised £200 for The Lifeboat Association.

The Queen Mary 2 is billed as “The Greatest Ocean Liner of Our Time” and she is a truly magnificent ship – internally and externally. The furniture, fittings and in particular the food are superb – they almost matched the magic. The proof of the pudding is always “Would you do it again?” Well, already three quarters of the present party signed up for the next Repro Cruise to the Mediterranean in June 2006. (See July’s The Magician or www.repromagic.co.uk for full details.)