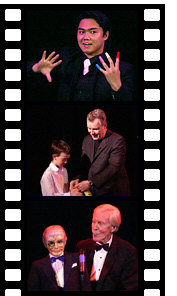 As conventions go, this is without doubt the best. The headquarters hotel this year, was different from the past. It was however a comfortable venue, with friendly staff, great breakfasts, and for those that wanted it, free adult channels after dark. Also in their favour, was the willingness to provide good hot food late at night, in the form of toasted sandwiches, fries and salads, or the fork buffet at the late, late show on the Friday. Alas, this put an end to last years Pizza fest, which was one of the highlights of last years convention.

Customs house, venue for all the shows and lectures, provided excellent multi functional facilities, my particular favourite being the studio area, which, with its tiered seating, and video facilities, gave all a perfect view for the close-up and lectures. One suggestion I would give however, is that the camera and projector be set, so the image on the screen is larger than that seen with the naked eye.

But that's the only fault with customs house. Except that is, for the dealers. Unfortunately the area set aside for the dealers was round the back, and up some stairs. It did feel a little less social than in past years, where the dealers had their own bedrooms. I noted that there was a studio area below the dealers room, on ground level, that might have been a better choice. Maybe next year?

On another point, because we had to walk down from the hotel, to the customs house, I got to see a little of the town, and it struck me how clean it was. Very little graffiti, and no litter on the ground shows a great deal of civic pride, and I commend the good folk of South Shields for this. If only my local council could do this.

Now to the conventions' performers, after all that's what we were there for.

OK, here is a review. It will be short, because I didn't take notes. I was having far too good a time. In no particular order; first the shows...

Daniel Garcia
Let me say publicly, Danny is one of the nicest magicians I have ever had the pleasure of meeting. He has an infectious personality, which makes watching him a pure joy. His signature piece "torn" was without doubt the closest thing to real magic I have witnessed in a very long time. His lecture included a brilliant handling for the bending paper clip, thoughts on a riffle force, that looks sooooo clean, and an effect whereby a chosen card is produced under the spectator's hand. As I was that spectator, I can assure you that its very strong magic indeed!

Trixie Bond
Hailing from Houston Texas, Trixie gave us her full 90 minute children's show, and boy did she pack the magic in. Straight away, she went on to do her stand up act, including effects like the blantz glasses, Grants tea kettle, Blow die, frosty the snowman, doves from ribbons, a bunny production, and much, much more. Her hints and tips on her lecture afterwards, gave some good sound advise in how to market yourself. It is a must-see talk. I believe she's lecturing here later this year. Trixie also bravely appeared in the close-up shows. I say bravely, because she was up against Shoot, and Danny.

John Lenahan
John's a legend. He also has an infectious personality. In his lecture, he gave us his thoughts on the Misers Dream, and the McDonald Aces. Peppered along the way, with anecdotes from his career so far. In the Friday night gala show, he gave us value for money. Ending, with his wonderful, slim slide routine. He got stumped by a heckler who shouted "you're the best magician I have ever seen." Lots of laughs to be had.

Shoot Ogawa
Woa Shoot!!! Again, what a nice guy. He has taken classics like the linking rings, thimbles, and the coin matrix, and turned them on their heads. Utterly breathtaking stuff.

Ray Alan
For most the highlight of the convention was witnessing first hand this 76 year old legend. Truly the greatest ventriloquist this country has ever produced. You would swear that Lord Charles isn't just a doll. He is a living breathing person.

Alex Lodge
Alex had two spots on the Friday show, the first his dove and manipulation act, the second, the Illusions. I've got to say I preferred the manipulations. Maybe it's because I know how Shadow box, Origami and Modern Art are done. The lay audience appreciated it though, which is the most important thing.

Max Maven
Max, was up to his usual incredible standard. Watching Max work is an education in audience management all on its own. His lecture was as expected, fantastic. If it's anything to go by, Max's notes were the only ones I bought. There is some very clever stuff there. His last effect using his favourite, Gilbrieth principle, to create a seemingly impossible triple prediction effect.

Pete Firman
Pete, what a guy, what an act. Opening with a silk vanish, closing with the Mullica cigarette act, with tons and tons of good solid stuff in between. I can't remember much, because I was laughing so hard. Do see him work if you get the chance to. He's amazing!

Romany
Another quality comedy act. I swear I've not seen audience management (albeit specially chosen audience members) like this in ages. Her character of the ditzy, scatty female magician was great.

Marc Oberon
Marc gave us his stunning u.v act. Now, I've worked with u.v, and I know how difficult it can be to get right. He got it right. And the ( 1st) levitation was superb... His second spot was a stage version of his award winning close-up act "Midas". He also included a classic floating apple, his knock out card in wallet, and his second levitation of the evening. Audible gasps were heard from both magical and lay audiences alike. This is how all illusions should be. Girl walks on, girl gets pushed back, girl floats, girl stops floating, and walks off. No fuss, no faffing around, just clean magic.

And finally... Robert Baxt
One of America's top performers, his first appearance here in the UK, and a very successful one too. His endless line of good strong comedy effects, wowed the audience in his stint as compeer on the Saturday show. He's a very, very nice guy indeed. See him if you can.

Now, overall this convention is without doubt the greatest convention you will ever visit. This year's event did not disappoint. Why not contact Magic Box or Karri Prinn at the council now and register your interest? It really is the greatest magical experience you can possibly have.

For me, the trick of the convention was the incredible "Between the lines" By Michael Murray, available on pre order only via Magicbox, closely followed, by Daniel Garcia's "Torn" - as I said, it's the closest thing to real magic in his hands, and I saw it a good few times. From all angles. It's a miracle.

And as always, the best value of them all, was the convention itself...