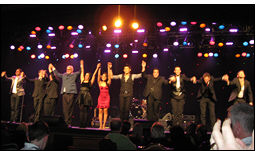 Paul Stone's Innovention delivered everything it promised. It was an intimate and friendly convention with between 250-300 conventioneers in a fantastic location dedicated to giving enthusiastic magicians the opportunity to experience magical excellence at close quarters. The support for the Innovention amongst British magicians was strong. There were 25 on our flight from Gatwick and we soon met up with others as they arrived on different flights. It was good to see Pat Fallon representing Ireland.

This was a convention with a difference. The schedule was carefully constructed to ensure that participants could attend every event on the programme. The specially selected dealers were open only at times that did not clash with sessions and the hall was busy but never overcrowded. There was plenty of opportunity to browse and chat over items for sale. The late night 'hang-out' zone at the back of TGIs was popular and there was much mingling of performers and conventioneers. The list of great contributors was exceptional and the whole experience was, for me, inspirational.

Over the next three days there was a variety of high quality workshops, lectures, performances and special events. The lecture and workshop list was awesome:

The highlight of the entire convention had to be Teller's Red Ball Lecture, a piece of pure theatre in its own right. It was truly a privilege to be in the audience. Teller spent some considerable time with the audience after the lecture, happily posing for endless photos.

Other shows included the incomparable Johnny Thompson Hour and Q and A session and Graham P. Jolley who performed his one man show to great acclaim.

Mark Mason, Eric Jones, Lennart Green and Bob Kohler were all outstanding in the Close-Up Sessions.

The Stars of Magic Show on Tuesday night featured high energy juggling from Aaron Sparkes, classic comedy magic from the Great Thompsoni & Co, artistic baton twirling from Nathalie Enterline, an excellent set from Mel Mellors and Richard McDougall's very funny cigarette act. Mark Raffles made his Vegas debut at the age of 92 and brought the house down. Kevin James closed the show as only Kevin James can.

Special events included an audience with Criss Angel which was open and frank and won him many friends. Criss Angel was also happy to mingle with the conventioneers for chat and photographs as long as they wanted.

Also in attendance during the convention was the legendary Peter Reveen and Norm Nielsen.

Paul Stone should be congratulated on having the vision, energy and stubborn determination to deliver the Innovention 2010. It is unlikely that any other single person would have the network or influence to stage a convention of this standard. Within a 24 hour period Criss Angel gave a great session, Teller delivered probably the best Lecture ever at any Magic Convention, and Siegfried & Roy attended the official launch of their incredible book - 'Siegfried & Roy - Unique in all the World'. At what other Magic Convention would you see that?