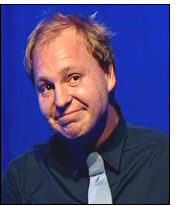 This now established close-up convention continues to attract the very best of talent. The latest one organised by Andi Gladwin and Joshua Jay took place over the weekend of January 12/13 at the Thistle Hotel, Cheltenham, and covered various aspects of magic from cards through to comedy and mentalism in a packed programme of lectures and shows.

On cards there were Dan and Dave Buck who showed how to break in a deck, then proceeded with pressure fans, riffles, snap change, deck flip and ending with the Triumph effect. They were brilliant. Yoann Fontyn showed various card techniques, Simon Aronson gave us three of his gems, Alex Pandrea was stunning with some almost impossible technical feats, Andi Gladwin showed five controls in five minutes and Joshua Jay revealed a chosen card from a burnt deck.

Time Travellers, Morgan and West, spoke about their characterization as Victorians covering not just magic but also dress, speech and music of that era, and giving a performance of their picture effect, the Hindu Needle Trick and a version of Sam the Bellhop. Mark Elsdon talked about his Meridian Technique being a way of enchancing tricks to make them more interesting and memorable, John van der Put related how Piff the Magic Dragon came into being, and John Archer explained his famous effect Blank Night in his usual comic style.

The 2012 Canadian Magician of the Year, Bill Abbott presented a lecture which included such items as the Five Card Repeat, Tic Tac the cure for the common cold, a name test, his Poker Face Demo with five spectators, and a version of the Hoy Tossed Out Deck, and Quentin Reynolds spoke of the human touch to a show as well as performing the Linking Pins, the Slydini Untying Knots, and an effect for children using just a handkerchief.

Mentalism was represented by Christopher Rawlins with the revelation of a picture drawn by a spectator using a special gimmick; Simon and Ginny Aronson presented their mystifying double mind reading act, and Luke Jermay spoke about his philosophy on the subject as well as presenting a 90 minute demonstration of his unique style of mentalism including a book test and a question and answer routine.

Then to bring the convention to a conclusion there was the Rune Klan (photo) comedy show emceed by John Archer who not only had fun repartee with the audience but also did a book test, this time using A-Z map books where he correctly predicted the name of a thought of street. Piff the Magic Dragon and his little dog did a card effect with the revelation of various cards including the final one where interacting with a computer he had the chosen card with the back appearing on the screen. He then ran out of the room and immediately appeared running through a garden scene on the screen to retrieve the card. Bill Abbott gave us his rather crude Smart Ass routine with a woman spectator who looked decidedly uncomfortable as he sat on her lap to reveal a prediction supposedly with his ass.

But the star of this show was undoubtedly Rune Klan. This celebrated Danish comedy magician had the audience helpless with laughter with his gags and crazy antics, in fact I was laughing so much I couldn’t tell you what he did exactly except a very funny book test with a unique ending. No wonder he is feted in Denmark.

The Guest of Honour was Jay Sankey from Canada whose trio of books The Definitive Jay Sankey written by Andi Gladwin and Joshua Jay has recently been published by them under their company name, Vanishing Inc. In the 90 minute event in his name on Sunday afternoon one hoped to see some of the items from the books, but sadly he only did one effect and that was a variation of Out to Lunch. The main part was a talk about how magic is slow to change and how he could help to alter much of this by a training website entitled Inside Deception which he is launching later this year. After his talk he was presented with a Lifetime Achievement Award.

PowerPoint featured in almost all the talks and lectures and Bob Hamilton assisted by Sue was also there with his cameras, all of which was relayed onto two superb screens.

Apart from the organised programme, groups of enthusiasts would gather between events and into the small hours showing each other their latest miracles, but then that is what The Session is all about.