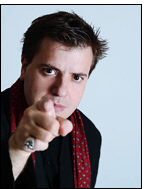 This close-up convention now in its ninth year continues to attract the very best of talent from both sides of the Atlantic. The latest one, once more organised by Andi Gladwin and Joshua Jay (Vanishing Inc.), took place over the weekend of January 11/12 at the Thistle Hotel, Cheltenham, and covered various aspects of magic from cards through to comedy with a little mentalism thrown in, in a packed programme of lectures, talks and shows.

In keeping with the current trend, cards featured prominently. Zach Mueller showed the Phantom change of card in a fan of cards and the Clip Shift; Bijau Cristian gave us a prediction card effect; the charismatic Joe Barry did various card locations; Ben Train gave us Cutting the Aces, an Ace Assembly and a Lottery Number effect; Father Alex demonstrated some gambling sleights and Pierre-Marie Lazaroo did Oil and Water and other card effects. Bebel, the brilliant technician from Paris, presented many of his gems like the transposition of a chosen card with the Aces, Oil and Water and his piece de resistance the Colour Changing Deck. Unfortunately much of the impact of his magic was somehow lost in the translation from French to English.

Moving away from all cards, John Guastaferro explained his One Degree and included the Luggage Tag Sandwich effect, and the Ring on an off Straw, but reverted to cards with the Ballet Cut and a Multiple Selection; John Carey gave us the only effect using coins; Jon Allen explained his borrowed note routine and bill switch, and the irrepressible John Archer had the audience in gales of laughter with his book test variation called The Streets using A-Z street maps instead of books.

Then there were Hector Chadwick aka Stephen Lang who spoke about Equivoque, Iain Sharkey gave a talk on presentation breaking it down to direction, detail, economy and voice, and in an interview with Joshua Jay American writer for TV and stage, Larry Wilmore, spoke of his experiences and demonstrated his card fold which he named Wash and Fold so named as it involved moving the hands as though washing them.

In the first of the two evening shows Morgan and West as Victorian magicians were as entertaining as ever with effects like the Great Escape using balloon handcuffs, the Houdini Needle Trick, Card in Shoe, a version of the Chop Cup, a couple of mental items including predicting the amount of change in the pocket of a spectator and details of a credit card and a version of al Koran’s Medallion.

The Gala show on the Sunday night was emceed by John Archer who had some great gags between the acts. George Firehorse, a favourite with comedy club audiences, interspersed his comedy with such effects as balloon in bottle, a Sherlock Holmes routine and the Torn and Restored Newspaper; John Guastaferro in a more serious vein did a rope and ring routine and a stage version of the Ace Assembly; Jon Allen a bottle of wine production, rope routine and Coins Across, and Danny Buckler (photo) was hilarious and had the audience holding their sides with laughter. There were no tricks, just pure comedy. To close Luke Jermay presented a strong mental item using a picture and a spectator from the audience, making it a great finish to a great weekend.

Guest of Honour was Guy Hollingworth who showed what a master he is not just with a deck of cards but in his presentation of the effects. There was his version of Twisting the Aces using Kings called Waving the Aces, an Ace Assembly and reverse, pulling the Aces and the whole deck through the lining of his jacket, Oil and Water, signed card revelation, and that truly magical torn and restored card. A barrister by profession, nevertheless he is the epitome of a professional magician and can take his place among the very best. It was a virtuoso performance. Immediately following this was an interview with Andi Gladwin and Joshua Jay before being presented with a Lifetime Achievement Award and a standing ovation.

PowerPoint featured in almost all the talks and lectures and Bob Hamilton assisted by Sue was there with his cameras relayed onto two screens. The attractive set was designed by Matt Clemitson, Marc Kerstein was in charge of the technical side and James Went on sound.


Apart from the organised programme, there were informal sessions with enthusiasts gathering between events and into the small hours showing each other their latest miracles. But then that is what The Session is all about.