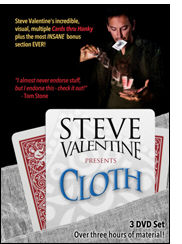 With all the controversy about the high price of one-trick DVDs, it’s a bit of surprise for me to review a three DVD set that deals with one trick. Or to be precise - one magical effect. Many one-trick DVDs on the market detail effects that have not been properly researched or audience tested and before the era of self-publishing would, at best, ended up as a magazine article.

Fortunately for you and me Steve Valentine is a pro and has done his research and this set is well worth your investment in time and money.

My interest in the venerable Card Through Handkerchief was piqued when I read Billy McComb’s Five Card Selection routine in one of the Ireland Year Books. It wasn’t known as the Multiple Card Selection back then. Billy’s routine climaxed with the Card Thru Hanky.


In Disc One of this nicely produced and edited set, Mr Valentine takes us though the basic handlings and sleights and offers non-sleight versions as well. While not encyclopaedic it is very thorough and teaches some of the best handlings and routines from the literature.


A plethora of routines and techniques are shown, all basically being the same plot, a card penetrating through a handkerchief. Sometimes it is the traditional effect, sometimes it pops through, occasionally it rises through and even floats up a la Zombie.

I’m assuming that Steve approaches learning a new trick in similar fashion to the way I do. Namely, research everything you can find, work on it, delete bits, add bits, think about it, change it, perform, change, add, edit and eventually come up with something worthwhile once you have visualised the effect you want to achieve. In Steve’s case it was a short paragraph about Nate Leipzig that spurred the development of his method.

Steve has done all that work for you, which is literally a huge amount of research and I’d say, equal to a university semester.


From this disc alone you have your money’s worth if you are looking for a routine to add to your professional repertoire. The Card Thru Hanky is an excellent way to finish a card set as it is visual and the magic should happen at face level. If you are careful about your angles and blocking, you should be able to do this strolling and table-hopping. I’d also refer you to Tommy Wonder’s books and DVD set for some extra tips and handling.

Disc Two covers tricks, stunts and gags to do with the handkerchief you carry with you. Steve prefers a white bandana rather than a men’s pocket handkerchief as it is a little larger. Google ‘white bandana’ and you can buy them quite cheaply, singly or in bulk. Steve covers a number of ideas and routines where the bandana’s corners are held by participants, making a little stage, allowing you to do a range of tricks that would normally require a table. He teaches a coins through handkerchief using the Little Hand gag - as sold by Michael Ammar - as its premise. Another routine that would work well, though it isn’t mentioned on the DVD is Bob Swadling’s Double Deception, sold by Mark Mason.

I was delighted to see Hankyrise, a routine of Len Belcher’s. Len, a creative magician contributed many tricks to British magazines such as The Gen and Abracadabra.

For further uses of a handkerchief or bandana I refer you to Billy McComb or Charlie Miller’s routines for the ‘Seven Cornered Handkerchief’ or my own ‘Five Minutes With a Pocket Handkerchief’ DVD, all of which is totally different to what is taught here.


Disc Three is dedicated to Cloth, Steve Valentine’s own routine. Three cards are chosen by the audience and shuffled (by them) back into the deck. The first two cards penetrate through in an amazing manner, the wrapped deck being shown on both sides and the material of the handkerchief being checked by the audience. The third card is even more amazing, as it visibly appears under the handkerchief before popping right through the material.

You need to make some special gaffs for Cloth, all easy to make and fully detailed instructions are given. You don’t have to do all three phases either if you don’t want to.

There are considerations for the professional worker with regards to pocket management as the gaffs have to be introduced in performance and stored when not in use. Steve covers palming and non-palming methods and strong misdirection is built in to cover the moves. There is no heat on you as the audience are totally unaware of the gaffs.

Would that all who rush to bring a DVD to market take as much time and effort to research and teach as Steve Valentine has done with CLOTH. It will come as no surprise that this set is highly recommended.

Full details and trailer at www.stevevalentine.com.