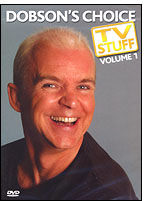 Patrick Page and John Fisher, two people who know about these things have both said many times "Magic isn't about tricks - it's about performances." There are now hundreds of DVD's available to magicians that explain in fine detail the technique and mechanics of hundreds of magic effects but there are few that reveal the real secrets of entertaining with magic. This new, unique DVD by Wayne Dobson, one of Britain's top professional magicians, is worth its weight in gold to anyone who really wants to learn how to present magic. He enjoyed an outstanding international career for nearly thirty years through his innate talent for magic and comedy that made him a headline star until he was cut down by MS. But still possessing a burning passion for the art, he creates, writes, lectures and performs at magic conventions around the world and in this inspirational volume he shows routines with high qulaity, digitally remastered clips from his successful TV shows interspersed with his personal commentary on the background thinking that led to the creation of these applause-winning effects.

You will not see methods, which he admirably credits to the originators, but you will see highly commercial routines and presentation ideas that he developed around the effects that marked his work as top drawer in profesional magic. He is inspirational to anyone who aspires to entertain with magic rather than just show tricks and I say this with no sentimental concession to his disability. This is real value, quality tuition from a top pro. that would cost you hundreds of pounds in private consultation. This is volume one and I understand that there will be two further volumes and if you regard yourself as a working performer, I highly recommend this and following volumes which will clearly inspire your future performances.

And as bonus footage, included is Wayne's famed performance in The Royal Variety Show when he scored heavily with Frank Bruno and Harry Carpenter with just two sponge balls and a touch of ventriloquism.

This is a must buy.