Snap, Crackle and Pop! A Brief Interlude with Fred Robinson 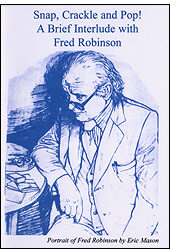 This is a charming performance only disc, featuring the skillful card magic of Fred Robinson, shot in Hyde Park back in 1980 on 8mm film stock, now professionally transferred to DVD R.

Not scripted or planned, the intention was clearly just to capture Fred performing some of his favourite routines for a friend, who captured it all on film. The handling is always relaxed and natural and I really enjoyed watching it.

Also included in the form of four A4 pages within the DVD case is "Fred Robinson's Coin in Tie" routine, described by Peter Duffie. This works really well having just watched the actual routine being performed.

With a running time just short of six minutes I can't help but think that this disc would perhaps have been better as an addition to accompany the upcoming book "The Magic of Fred Robinson" that Martin will be publishing in the near future. However, until that book is released, here is a chance to see and enjoy the skillful card work of Fred Robinson.

Price £12.00, plus postage, available from: www.martinbreese.com (scroll down the home page)