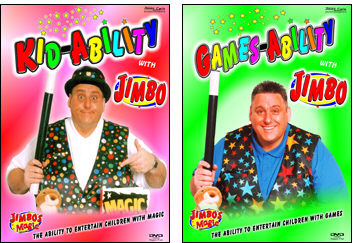 Many of you will remember Jimmy Carlo when he created a very funny, award winning act as a Sumo warrior. However over the last few years he has re-invented himself as Jimbo and is now one of our leading Children's Entertainers, and has become extremely successful.

He has at last brought out not one but two DVDs called Kid-Ability and Games-Ability, the former showing how he entertains with magic and the latter how to present funny and very entertaining games. A subject that has been sadly overlooked in the plethora of DVDs on children's entertaining.

When I sat down to review these discs I felt that I would need some professional help so engaged the services of my two grand-daughters Erin 8 years old and Lilah 4 years old.

The magic DVD opens up with an audience of school children clapping in time to Jimbo's very catchy signature theme tune that incidentally my grandchildren were singing and humming to long after the show had finished.

He then proceeds to present his own slant to various well known children's tricks such as Supreme's Magic Spell Book, a changing bag with a blendo, the evergreen Silver Sceptre, Magic Colouring Book and even my own Tel's Bell with a very funny routine involving an orange hooter, a sweet production, and a hilarious paper tearing bit that had the children falling about with laughter. There were 14 routines in all, together with all those bits of business that are so essential to the entertainment of Children.

One interesting bit was when he came to the Silver Sceptre with a great story line about a present from Santa Clause, Lilah was laughing and yelling at the screen and reacting as if she had never seen it before, and yet she must have seen me do it many, many times, which only goes to prove, what I have said all along that children love repetition.

Games-Ability DVD
On the Games-Ability you will find Jimbo presenting a series of funny, original and exciting games that are always a most useful addition for the successful children's entertainer. It is a fact that clients nowadays want you to provide the whole package and this DVD will prove to be most useful for the entertainer who wishes to take advantage of this market.

To sum up I asked the girls what they thought of the DVDs to which they replied, "He was very, very funny"


You cannot ask for better than that.


Games Ability with Jimbo
If you have never run games at a children’s party before this is the DVD to buy.

I particularly like the idea of crazy sports and the big bloomer game is hilarious and is workable on a stage or in a home. The music that Jimbo uses is most important and adds to the fun of the games. The DVD is full of first class ideas for all children’s entertainers.

Kid- Ability with Jimbo
This is a first class DVD for children’s entertainers. It is well shot and filmed. You cannot fail to see how well the children react. Each routine is practical and easy to achieve. I cannot fault any one of them. The props are easily available to all entertainers, amongst them a sweetie routine which is worth the price of the DVD alone.

To sum up. I consider this to be one of the best children’s DVDs on the market.