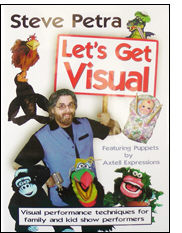 I first knew of Steve Petra, 4 years ago when I stumbled across some YouTube clips of him performing with Axtell puppets. Those clips were packed with original material and very funny. It struck me then that Steve was a naturally creative performer who pursued his own ideas and innovations rather than following what the rest of the flock was doing.

I contacted him towards the end of 2011 to ask why he’d never considered releasing some guidance material for entertainers who use puppets. I was delighted to learn that he was putting something out early the next year. His unique vision is now available as an instructional DVD titled ‘Lets Get Visual’, and in it he shares the secrets of his success.

If you’ve never seen Steve Petra before, your first impressions could be that of a mad scientist type figure who doesn’t own a razor. He’s the first to admit he looks like a gorilla. I always wondered what went on inside that hairy head of his. After watching ‘Lets Get Visual’ I feel I have a better understanding of his creative process and much more appreciation for his imagination, and determination to bring his creations to life.

You don’t get a crash course on how to do ventriloquism, or how to manipulate puppets. Instead Steve goes straight to the heart and concentrates on what makes routines with puppets entertaining.
He explains the eight elements that make his shows a success. He describes each one in detail, sharing what he calls the ingredients to ‘Visual Puppet Gumbo’. Using these ingredients keeps the audience involved the whole way through, which is essential for any entertainer, not just the ones with puppets.

It’s not so much the skills, but how to apply certain factors to a puppet performance in order to get the best reactions from the audience. Understanding exactly what these are and how to apply them will help many take a short cut from the usual steep learning curve that performance experience brings. What Steve took many years to learn, he kindly shares in one hour and twenty minutes.

Each ingredient is road tested through a series of 6 puppet routines, all filmed in front of a live audience. You get to see for yourself how his theory works, and begin to get a sense of how it could make a difference to your own performance. The routines feature characters that are instantly entertaining, and routines so visual you daren’t take your eyes off through fear of missing something.

Besides learning how a puppet with its own agenda or how a puppet interacting with its environment can increase the entertainment value enormously, there are tons of other great insights. Steve is renowned for his visual stage appearance. I’m not referring to his body hair, but to his eye catching boxes, labels, and other curious props which carefully share his stage. Petra explains how he constructs some of the props that his puppets use, the reasons for their existence and how they contribute to the entertainment.

Without any hesitations, and perhaps like a mad scientist, Steve also talks us through some of the modifications that he’s made to his already perfect Axtell puppets, and by doing so has actually enhanced their abilities to perform even further. An added bonus to these little tips is the modifications are very simple and can be done for very little cost.

The sharing goes deep into the handling techniques for magic moments, such as the banana volcano from a puppet’s mouth, perpetual egg productions from the jaws of a dragon, and how to get 20 hot dogs from a small fish which fills the whole stage (you have to see it to believe it).

One of the most valuable parts of the DVD for me, which I almost over looked, is Steve’s anecdote about having his show critiqued by a respected fellow professional. He reveals the content of that feedback, plus the improvements he made as a result. One thing he did, which is another shining example of his genius, was to create a living universe inside a bucket. He performs alongside this bucket with devastating effect. Watching a live performance of this in action it was evident the audience were absorbed as much as Steve. If you’ve never tried something like this it will bring a brand new dimension to your act that in turn spins an entirely new level of entertainment and performance ability. Its beautiful, having a whole new living world within a bucket (or any other type of container) at your fingertips, that you can open, close and interact with at will.

The asking price of the DVD is spot on. For those who perform or want to perform with puppets, ‘Lets Get Visual’ will inspire you further. For entertainers in general, there is a lot of shared wisdom which I’m certain would also be beneficial. I’ve made my living performing with puppets for a number of years now and my reactions to what Steve shared were ‘why didn’t I think of that’, or ‘Wow, I want to do something like that!’
Steve is one of those lucky individuals who you want to call a genius. He’s clearly blessed with a vivid imagination and the ability to give life to his ‘dreams’. Equally he has a natural ability to transform his creations into solid routines and use them in the real world to entertain audiences young and old. Should you chose to buy a copy, you won’t be disappointed.

The 'Let's Get Visual' DVD, by Steve Petra, is exclusively available from Axtell Expressions www.axtell.com/vidins.html