The Movie: Tricks and Fiction from the Road

by The Flicking Fingers
Reviewed by Peter Lamont 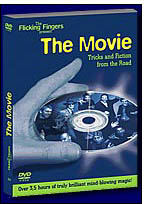 If, through the wonders of genetics, Guy Hollingworth and John Lenahan were to have a baby together, it would surely look like Thomas Fraps. Not immediately, of course, at first it would look like Geoffrey Durham but, thirty years on, you would be struck by the Hollingworth-Lenahan resemblance. It is true that Thomas speaks with a German accent but, with parents like that, there were bound to be a few problems. Yet despite his troubled genealogy, Thomas is surprisingly stable, extremely thoughtful, and very generous. Indeed, when I met him in Munich recently, he gave me a copy of the new Flicking Fingers DVD, The Movie. Being Scottish, I found this so surprising I completely forgot to mention that, being Scottish, I have never bought a DVD player.

I have, therefore, had to watch this at work and, as I work in a university, the students also tried to watch it. So I watched it in the evening, and the cleaners tried to watch it too. So I decided to let them see it - not all of it, it is well over three hours long - but the wonders of DVD meant that I could easily show them whichever tricks I wanted (without explanations), and get some idea of whether magic on DVD works for lay people. And, if students and cleaners are representative of the lay public, it certainly works, so much so that this week the number of late essays has gone up considerably, and colleagues have complained about the state of the toilets. This, in itself, might be a sufficient reason for buying The Movie, but fortunately there are others.

As you may know, The Book was the last output from this group of ten German magicians who have defied tradition by being funny as well as talented, and who call themselves Die Fertigen Finger. For those of you who do not speak German, 'finger' means 'finger'. 'Fertigen', on the other hand, they translate as 'flicking', though I suspect it actually means something much ruder in German school playgrounds. In any case, given that people who read a book then see the movie invariably prefer the book, why should you buy The Movie, when The Book is already available? The first reason is, as I say, that you can show it to others, and as the DVD includes 45 minutes of live performances of various individual flicking fingers - including Jorg Alexander's wonderful handling of 'The Sympathetic Clubs' -, this is a significant reason. A second reason, perhaps more important for many potential buyers, is that the contents are actually quite different, with a fairly small overlap in terms of material, and the quality of all the material is high. These are strong, straightforward effects and routines, suitable for both formal and informal situations, and using practical methods involving a range of techniques, many of them quite simple. Fortunately, there is no need for me to describe the effects here since, if you are reading this, you can access their site and read that information there. Suffice to say there is some very good stuff. A third reason for getting the DVD might be that, having heard that Thomas Fraps looks like a cross between Guy Hollingworth and John Lenahan, but with a German accent, you want to check this out for yourself.

All of these are commendable reasons for buying The Movie, whether you already own The Book or not, but there is another reason, and it is a good one. For beyond the strength of the material and the clarity of the explanations and the excellent production values and all the other usual considerations that will be covered by professional reviewers, this is actually enjoyable to watch. It is, quite frankly, the only magic DVD or videotape I have ever watched all of. It is, to be fair, the only magic DVD I have ever watched, but I have seen many, many magic videos and, with the exception of performance-only productions, I have never managed to make it all the way through any of them. The popularity of magic videos has always bewildered me because, with the exception of the tricks you want to learn - and I do wonder just how many are actually learned -, the vast majority manage to be even more tedious than the average magic lecture. And that, if we are honest, is no easy matter.

There is already so much choice for every level of technique and experience that it is difficult to believe magicians actually buy videos to learn new material. And yet, with all the effort put into creating new effects and methods, there seems to be a depressing lack of creativity put into how these are presented to customers. A cynic might suspect that this is because there is no profit in going to the trouble, and that, alas, is probably true. Nevertheless, the Flicking Fingers have gone to the trouble, they have taken considerable time, and no doubt incurred significant expense, in order to provide magicians with something more substantial than a DVD of effects and methods. This 'magic road movie', based on a fortnight's traveling in Germany and Sweden, may have a fairly skimpy plot, but it has managed to make the explanations as entertaining as the effects. The result, fun apart, is that you will probably watch this more than once and, therefore, learn more from it. Indeed, you may need to watch it again just to appreciate the more subtle gags that have been included for magicians. If you have seen these guys perform, you will know that they are funny, and if you have not seen them, you now have the opportunity. The Movie is not cheap at $65, but it is worth bearing in mind that at a length of three and a half hours long, including twenty tricks as well as several FISM acts, it could have been sold as a three volume set (thus making it a bargain). Given the number of people involved, their priority is clearly not profit, which is not only thoroughly refreshing, but may explain why there are no plans to produce a sequel. This, then, may be your only opportunity to see them.

As I said, I got my copy for free, but it was certainly not in return for a positive review. To be perfectly honest, and with apologies to Thomas, I suspected I would probably lend it indefinitely to somebody who actually enjoys magic videos. But I have not passed it on, I am keeping it (at home because, unlike the students, the cleaners have access to my office). At present, it is my entire magic DVD collection, and if magicians learn from the flickers or fingers or whatever the appropriate abbreviation is, that will change. Meanwhile, I can only say that, in my opinion, it is more original, clever, entertaining and generally higher quality than the vast majority of magic videos I have seen. And if you are actually looking for new material you can actually use, you will find it. And if you are not, just sit back and enjoy The Movie, and ask yourself one question: is the disturbing resemblance of Thomas Fraps to Guy and John really just a coincidence?