The Tapestry of Deception Part 3 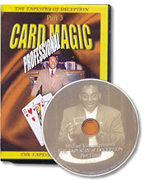 I have come to the conclusion that Michael Vincent is the embodiment of 'Mr Sheen'. For everything he touches receives an extra polish, bringing each effect to a brilliant finish.

This DVD, the third in the 'Tapestry of Deception' series, illustrates how effects can be elevated a further notch on the "Wow!" scale by the application of love and meticulous attention. Such detail extends the to the explanation sections of the DVD. He does everything for you, bar come around and perform it live in your own lounge.

Three effects from his professional repertoire are taught: Victor Farelli's 'Up the sleeve', Eddie Fechter's 'Be honest, what is it?' (two-card monte) and Derek Dingle's 'Colour changing deck'. Each are peppered with additional finesse and lateral thinking which emphasised, to me, that effect descriptions in books are only the bare-bones of an idea. Michael fleshes these out to their maximum, and the audience reward his work ten-fold.

Supplementing the explanations given to the Magic Circle audience, there are also additional close-up shots, filmed later, which hand-hold the student through every phase of each sleight, together with extra handling tips.

Magician's can often form a jaded audience (oh yes we can). You see, we are so used to the wonders of our world what often our response doesn't truly reflect the nature of the gem presented. While the audience at The Magic Circle were certainly appreciative, their reaction was a far cry from when I've had the pleasure of seeing Michael tear the place to shreds with a live performance to a lay audience. So, remember that the magic gets filtered twice on the DVD. Once, because it's playing to magicians; the second being the bland eye of the video camera. These aren't just three random effects strung together for our education, these are jewels from Michael's personal collection, which he is being generous enough to share. As such I whole-heartedly recommend this disk. There is much to learn here. It will take many viewings for me to absorb it all.

Negatives? The type colour and size on the cover made me give up after the second sentence, but maybe that's just me. I was also disappointed that Michael tips his Rear Palm Colour Change. In his hands it is a thing of rare beauty, worth the price of the DVD alone. But I can certainly imagine its abuse in the hands of those not willing to put in the work for the correct timing and delayed revelation. Michael, you should have kept that to yourself.