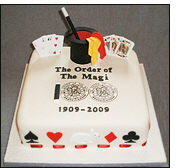 The Order of The Magi (Manchester) held their Centenary Dinner and Cabaret on the 21st March where 150 diners in the presence of Rt Hon Lord MacGregor of Pulham Market PC OBE MIMC (Gold Star) sat down to an excellent 4 course meal.

Humorous and interesting speeches were delivered by His Lordship, The President, David Ball (Secretary of The Magic Circle) and Vivien Jackson (President’s Lady). During this part of the evening engraved salvers marking over 100 years of service to magic were presented to The Magic Circle and Davenports. The cake was then cut and distributed during a short comfort break.

Now it was cabaret time and President Elect Ian Ball in full OTMH concert chairman costume conducted the proceedings in enthusiastic ‘The Good Old Days’ style. Opening was John Styles in fine form holding audience attention as only he can. Following on Roy Davenport romped through his Spanish Act with speed, grace and masterful manipulation. Now back to John Styles but this time in his Chelsea Pensioner role. This had the audience in fits of laughter from beginning to end. You just did not have time to stop laughing at one line before the next one hit you. A truly magnificent performance. To close came the crazy illusion antics of Martyn James and Company. He was fast, funny and you just didn’t know what was coming next. Highly recommended for any event.

Keyboard /Vocalist Dave Prentice kept the late night dancing going until the taxis and mini buses arrived to take us all home from a most memorable evening.