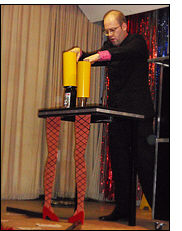 We first became aware of the talents of Steve Price AIMC back in January when the South Downs Magicians were invited to perform on stage at The Magic Circle in London. Also on the bill that night was Steve.

Although it was still 11 months away, we booked Steve to be the main cabaret performer for our Christmas party because we felt he would be ideal for our audience of magicians, their families and other guests.

Last Wednesday, our judgment was proved right when Steve produced a thoroughly entertaining set to round off a highly enjoyable evening.

He put the audience at ease right from the start and his humorous presentation of the Hydrostatic Glass certainly whetted the appetite.

He handled his chosen spectators kindly and courteously throughout the evening, including a very keen youngster who helped out on stage with a giant version of “Guess Who?”

Steve’s signature piece is his “Omelette Roulette” with eggs. For those club members who had seen it back in January at TMC, it was another reminder of how, in the right hands, tension, drama and comedy can combine to create a memorable magic act. For those who were experiencing it for the first time, it was a highlight of the evening.

Selbit’s Blocks is not the routine of choice for most stage magicians but Steve presents it with some clever touches. His deliberate mistake in the stacking of one of the blocks which the audience think is accidental produced a mixture of gasps and laughter when it was revealed to match the other stack.

Every magician knows many different ways of revealing a chosen card but not many use a loaf of bread as their favourite method! Steve certainly earned his crust with this item with the help of another youngster from the audience.

More laughter followed with the Comedy Legs table and a Multiplying Bottles routine. Again, Steve put his own touch to this classic with the use of a napkin and coloured silk changing places as well as the bottle and glass.

And so on to his finale – Torn and Restored Newspaper. The long delay between phases as Steve stood there with a pile of torn-up paper before the sudden restoration ensured that the climax was all the more dramatic and earned Steve a thunderous round of applause.

It was a wonderful evening for the club and all our guests. Thanks to Steve Price for rounding off the calendar year for us in such tremendous style.