The Order of the Magi Helen Moran Memorial Lecture 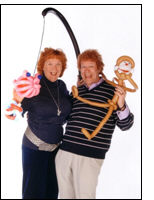 Alan Astra presented this lecture for 2015 and a very interesting and informative one it was too. He is the current president of the IBM British Ring and well-known as an entertainer and magic dealer.

Anything Alan and his wife Barbara do is certainly different. Let’s face it how many lectures have you seen where the presenters open with an a la Morecambe and Wise style routine, bobbing in and out of the curtains? Quite, neither had I until this particular evening. They clearly both have a way of capturing their audiences right from the start, creating laughs and making sure it stays that way for the duration.

He started with the Miser’s Dream, for children? I hear you think! Yes, in the right hands anything can work. He told a story about having a collection for the birthday child’s mum to pay for a holiday. The old gag of producing a coin from the ears of several children played well with the climax of a giant coin which would hardly fit in the bucket.

Next on the list was an adaptation of the original Luna Trick (or Man in the Moon) which to those not familiar with this, it is based on the sliding die box principal but uses a circular flat disc instead of the standard die. He had taken the original apparatus and painted both items as a flower garden. The disc (moon) became a picture of Fred rabbit. Alan had all the usual bits of business that children’s entertainers use but additional ones of his own which he freely shared.

His just chance routine, where the birthday child wins, (not the magician) played well. I have always been sensitive about the magician winning against a child and Alan got it right, so top marks there. His sure fire way of making sure the ‘losers’ came out of the envelopes correctly was impressive.

An egg bag routine but using a Wee Willy Winkie style type night cap changed the whole concept of this utility prop especially when the final vanish was via an alternative type devil’s handkerchief. Yes old props but certainly new ideas with a good running time.

He had a great routine with “Blank notes to Bank notes” or “Cash Flash” as it is sometimes called. The blank sheets were funny money, meaning advertising material for the performer promising for example to pay the bearer 20 smiles and the like. Great giveaway and would be kept whereas business cards as such can be thrown away when the occasional wallet clear out takes place.

This opening brought some more priceless advice on marketing and promotion. He felt that in the early days the inclusion of a website on your advertising showed you are really up to date with technology. Nowadays he thinks all you are doing is directing the prospective booker to an area where they may find someone nearer or cheaper. It is the same concept as those who print “Find me in Yellow Pages” on their material.

He had general good advice on advertising wording, like don’t clutter it up with everything you want to say. He cited an example used by the late and much loved Patrick Page. All it said on his card was ‘MAGIC Patrick Page and a phone number’. The view taken is that the person you give this to at an event has already seen you so knows how good you are. If they pass it on they can tell anyone about you. Let them do your publicity.

He had a very clever but so simple balloon loading system for your inside jacket pocket. This allowed you to ask what model a person would like and then produce the correct coloured balloon without fumbling. It was worth coming to see this item alone.

The magic square is known to many and Alan had an interesting way of choosing the number everything adds up to. Basically it was on the lines of the ‘add a number pad’ but no string to break! All you needed was a piece of blank plastic card the size of a credit card and a dry marker. This was a real gem.

Alan is also a magic dealer but made sure this was only said in passing as he stressed it was a magic lecture not a dealer demonstration. He did though have some items if anyone was interested at very favourable prices which seemed to sell well. One particular one that caught my eye was a multiple out based on optical illusions.

It was a night to remember, well presented, very funny and extremely informative. President Kay kept a tight rein on the proceedings. I know she is only small but has a good stage voice. Finally Alan marked his visit with the presentation to Kay of a clock with the Magi logo on. I’m sure she will remember her term of office for a long time to come!

On your behalf I would like to thank Peter Moran for sponsoring this lecture each year to keep Helen’s name alive in The Order of The Magi. Art.