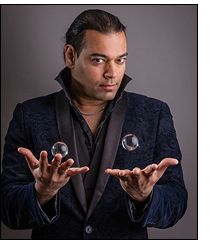 We wanted to start 2017 with a bang and we certainly did, when we had Brendan Rodrigues come and lecture for us at South London Magical Society. It was probably the best lecture we’ve ever had at our club and certainly the most popular – the room was full and we had about 10 guests that came from as faraway as Harrow to watch this lecture.

Brendan basically taught us from his act which won him “The Magic Circle Close Up Competition” and what he did on “The Next Greatest Magician” and his “Visualize” DVD. He started off with his Crystal Ball opener and after showing us, he then proceeded to teach us some of the basic moves to make the ball “float” “hover” and “glide”. The ball came alive in his hands and with his techniques.

He then showed up his Pen & Coin routine – where the coin and the pens continually changed places and then reappeared in different places. Even when explained and in slow motion it was hard to see what was happening as his technique was highly polished. In this section we spent some time on “Sleeving”.

To finish the first half we learnt his rubber band routine – which started with something for everyone aka “Crazy Man’s Handcuffs” and finished with his amazing interweave finish. Even by the end of the evening some members were beginning to get this.

After the interval we spent time doing his “Finger Exercises” which was interactive and fun and had the whole club involved. We also did the “Five Coin Challenge” which again most people got to grasp the basics to go away and practice in more detail. We then spent some time doing “Flourishes” with Coins, Pens and Rings (Brendan did all three at once!).

Our lecture closed at 10pm but 90 minutes later Brendan was still jamming with members and sharing ideas/moves/routines, that in the end we had to ask people to go home in order to lock up. All of this made it a very interactive and enjoyable evening. Our eldest member who has been at the club for 38 years commented afterwards - “out of this world”. There was something for everyone, from the hard seasoned pro to the hobbyist and I can’t recommend this lecture highly enough. If you get the chance book him – you won’t be disappointed.