'How I Feed My Children' The Carl Royle Lecture
The Order of The Magi, Manchester
Tuesday 10th January 2017
Reviewed by Jonathan Royle 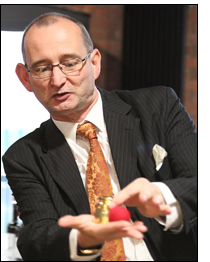 Firstly just to set the record straight, myself and Carl are in no way related, he was born with the surname Royle, whereas I choose mine as a stage name, it being an anagram of my former stage name Le-Roy.

I mention this as I don't want anyone to think this review is biased in anyway, I can assure you it's not and indeed it should also be noted that my years of performing close-up magic at tables and social events are long behind me and consequently I had considered not even attending this lecture.

Well as it turns out, despite the fact that I rarely perform “Close-up”, I am delighted to say that I was pleasantly surprised by how much value I took away from the evening, including much to my surprise at least, two ideas that can easily be used by me in my Cabaret and Stage Mentalism Shows.

Carl opened by performing an extended example of the kind of things he does perform when he approaches a table in a restaurant or a group of people at a wedding or corporate event, and then step by step showed us not only the “how” of what he was doing, but also I feel more importantly explained the psychology of the “why” things were being done this way.

His Gold Cup Con is a Micro Chop Cup routine that is performed with the cup being rested on his own flat palm at all times, thus eliminating the need to invade anyone's table space and of course making this practical for those environments where there simply are no tables! It was a fast paced routine with a patter theme that made the whole thing logical and entertaining, whilst also having numerous moments of magical surprise.

Other routines performed and explained during the course of the evening included a variation on the Ambitious Card plot that was simple in handling but packed a serious punch with several truly unexpected twists along the way.

A chosen 'card to box' routine was used beautifully to tie things together and then a true miracle where a blank faced playing card was folded up and signed by the spectator before magically printing itself (still with the person's signature there for all to see, on the card) into the exact freely chosen card that the spectator had just named brought loud applause from all and gasps of amazement from many.

The evening included many tricks and routines which were all quite clearly honed to perfection by somebody who has performed them thousands of times with real audiences in real situations, enabling him to iron out all the snags one could encounter and save us all a massive learning curve by passing on these wisdoms, experiences and insights.

My two personal favourites of the evening were when Carl asked someone to just name any playing card out loud and literally a split second later he reached behind the persons ear and produced a folded up playing card. At this moment I could hear some people quietly saying exactly what I was thinking, namely “that can't possibly be the card he just named or can it?” Well let's just say that feeling of witnessing “real magic” that we all once had as a child returned in that moment, as Carl let the person unfold the card themselves to discover that yes indeed it was the exact playing card they had named. It is therefore interesting to note that Carl has named this routine “Child Like” which is very apt indeed given the impact it has on people. It may sound too good to be true but let me assure you this was no pipe dream, Carl had not simply struck it lucky on the night, there was no pre-show work and this is something that just like every other item in Carl's lecture is a real “worker” that is practical, commercial and hugely effective.

My other favourite was his method for peeking information that somebody has written down onto a business card enabling you to apparently read their minds. As with all of Carl routines, he has thought everything through and engineered things so that everything can be performed surrounded if required and so that things are as simple as possible in operation and technique to perform, but in all cases pack a devastating punch in terms of impact. This “Peek” is perfect for close-up, but is something that I shall indeed be using within my cabaret and stage mentalism shows for sure.

Along the way the Psychology behind things and the added gags and insights made this a truly entertaining evening that seemed to pass by way too quickly.

The lecture is called “How I Feed My Children” and having seen it, I have no doubt that Carl's children will have been eating very well for years as this was magic as it should be with the emphasis on impact and entertainment.

My only disappointment was we did not have more time available on the night for Carl to share even more with us all.