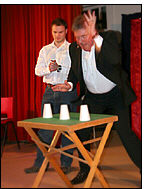 I think it is fair to say that you can learn as much from a performance as you can a lecture (if not more), which is one reason why seeing Chris North at the Ipswich Magical Society was a real treat for everyone who attended.

The first half of the evening was devoted to performance in that Chris showed us part of his current Mentalism show. The second half was a Questions and Answers session with Chris telling anecdotes from his 40 years in show business and answering any questions from the floor of which it has to be said there were many.


Many people will probably know of Chris as an Illusionist. Indeed he has been performing an Illusion show in one form another since the 1970’s so seeing him perform mentalism in it’s purest form was quite a treat from such a professional showman.

As someone who performs a little mentalism myself I found it not just entertaining, but very useful too and judging by the discussion of the Ipswich Magical Societies hard core mentalists in the pub afterwards, I wasn’t the only one who thought so.

As Chris freely admitted none of the tricks he showed were ever meant to be magician foolers. This was after all part of his show that he takes around the country. His presentation however of everything he performed was very original and just goes to show how import this part of an act is.

His finale of the first half was something that not many people ever get to see, especially performed so theatrically. With the help of his lovely assistant, Belinda, they performed their version of the Spirit Cabinet that dates back of course to the Davenports back in the 1800’s. They were both dressed up in Victorian costume which set the scene very well creating exactly the right amount of atmosphere.

This is not a piece that many people could get away with, but Chris and Belinda executed it perfectly. Not just with the necessary amount of sombreness but also with a few well placed light hearted remarks that broke the tension.

The second half of the evening was as fascinating as the first half was entertaining. Chris began by giving us a very brief history of his life in show business, which started back in the 1970’s with his appearance on New Faces and ended to current day where he is now concentrating solely on his mentalism act, something that has been a passion of his since the very start of his career.

So to sum it all up, it was a very special evening and something a little different to most club lectures.