Reviewed by Mike Sharples, Secretary, The Order of the Magi 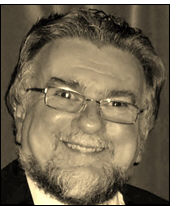 Our August lecture this year was given by our PRO Geoffrey Newton.

Geoff told of the Afghan bands, including a brief history lesson delving back to the late 1880’s where over the years to come several different patters were used in order to create a number of different effects whether they were joined or just made into a bigger loop depending on the various twists.

We were then provided with printed out sheets for those who couldn’t print them out at home following on from Geoff’s email. By a series of very cleverly worked out folds and if you followed the instructions correctly all the European countries and all the Asian countries that were mixed up on the sheet were separated. I say follow correctly I didn’t but because I was writing the lecture notes up and I ended up with a bit of a mixed bag.

A nice just chance routine followed, which as Geoff explained just chance in the world of magic really means no chance for the spectator to win. A member chose four envelopes and in turn opened each one and was even allowed to swap at the end if he wished to do so. All four of the envelopes had blank paper but the remaining envelope had the banknote in. Geoff went on to a full explanation as to how the fakes were made.

A Passport prediction was the next gem in this lecture, 5 objects were placed into envelopes and mixed up. 4 of the envelopes were eliminated by a free choice of the spectator, the item that was left matched the prediction in the passport.

Geoff had everyone trying to make a “waterbomb”. It was like watching a modern day version of the generation game with younger and more senior members amongst us, all seeming to be a myriad of fingers and thumbs. Once made this could easily be transformed into a dice to be used in a book test, but unknown to a lot of people a pair of rolled dice cannot exceed 36 combinations. Once you know this, the possibilities are endless.

Next up was something of a compere gag rather than a trick, it was similar to a magic square but instead of numbers used the word CHIPS. This blended nicely into the following item called “fish and chips” using a newspaper to hide the modus operandi, which was very cleverly constructed.

There was a bit of a challenge next with Geoff asking everyone to make a freestanding piece of paper with 1 fold and 3 cuts. Once this was achieved, a bit of discussion later, proved the same effect could be done with playing cards or as pointed out by our member Cliff Cowling using a business card.

An item called “we think, we think alike” was next on our PRO’s list. This was a picture prediction that used no force but using a very clever method was able to deliver the required result.

I think I’ve got all these in the right order but next was a clever routine where 5 cards were selected from a pack where each card had a number on the back which bore no resemblance to value of the card. By giving out the face value Geoff was able to tell the number on the back, this was achieved using a clever numbering/memory system.

Geoff’s final item was a bit of a sucker where by use of the Ali Bongo enlarging hat was the cerebral link between another member, Steve Manford and the audience eventually revealing the card that had been chosen by Steve. Once again Geoff showed everyone how to make the hat, unfortunately for me, I had to part with my hard earned pocket money to buy the lecture notes, to show me how to make the hat, as I was too busy writing this article for you guys. Like all the lectures Geoff has put together this was also very meticulous and well organised and was enjoyed by all who attended.

President Dave McGee gave the vote of thanks on behalf of the Magi.

© Mike Sharples, Secretary, The Order of the Magi, August 2014 www.orderofthemagi.org.uk