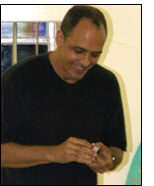 Even before the lecture started Greg Wilson was giving tips on how to classic palm a baby. OK. I admit that sounds a little weird and I guess you had to be there to appreciate the whole story but it does highlight the sense of fun that was generated throughout the whole evening.

Greg Wilson is probably best known for his close-up and impromptu magic. He has many DVDs and effects in the market place, several which I have seen so I felt I had a good idea of what to expect when I booked him, but on the night he was so much more. So very much more.

Greg Wilson has an infectious personality that you just can’t help loving. He taught a lot of magic and by magic I don’t just mean tricks and sleights but also all the wonderful subtleties and general psychology of when and why he does what he does.

This in itself made it a great lecture. What set it apart from all the others was that it didn’t seem like a lecture at all. From start to finish it was like watching a live performance (and not just any performance either, an absolutely brilliant one). I personally feel that you can learn as much (if not more) from a performance anyway so we really did have the best of both worlds. In fact some of the best things I took away from the night was from watching how well he interacts with people.

As I mentioned before he taught an awful lot of wonderful effects and sleights. More often than not the sleights he showed us had to be repeated several times because they were simply so deceptive. The misdirection for his ”Pitch and Ditch” effect worked so well that even when you knew what to look for it was difficult to see what he was doing and as for the “Backstage Pass”, well I am sure many people there still don’t quite know how he did it. Luckily for me he showed a few of us again in the pub afterwards, but in case you were wondering it is also taught on his “In Action” DVD (Vol 1).

All in all, there was something for everyone, from beginner to experienced magician alike. It may well be true that not everyone could do everything he showed (self working my arse!) but I am confident in saying that no one went away disappointed. Greg Wilson is probably one of the most charismatic people I have met. The energy he bought to the evening was second to none and by the end of the night everyone’s sides were aching with all the laughing.

Perhaps the main reason I found this to be such a great lecture was for how inspired I was at the end. It really made me want to get out there and perform more often.

I have been to many lectures all over the country but this was the first I can remember where the lecturer received a standing ovation at the end. It was a very special night indeed.