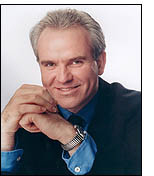 Ian Rowland, for those that don't know, is a leading mentalist and psychic who has travelled the world with his 'Beyond The Psychic' show. He also looks a lot like Steve Martin! The evening in question for me had two vital ingredients that most lecturers forget, namely practical effects and entertainment by the bucket load. Anyway down to some of the effects shown:

The lecture kicked off with 'Light Metal' a very clean and convincing spoon bending routine. Which quickly made those sceptical in the audience realise that this was a man who knew what he was doing. Next up was 'Thought Flash' a beautiful prediction using a Polaroid film. This effect had the same impact as other Polaroid based tricks but without any of the set-up or expense. The rest of the evening then seemed to fly by with Ian performing and explaining 'Subliminal Prediction' and 'Preludes' plus many others. He also shared with us various tips and techniques that could be applied to other effects and branches of magic. To end the mentalism section Ian performed 'Elephant From Matchbox.' But I don't wish to spoil your fun, so if you want to know about this effect buy the notes or book him for a lecture.

After a short break we were treated to a condensed card magic lecture (due to time restraints). This had everything from sleights to card spinning to a one-handed ambitious card. And as before it was all-practical entertaining magic that didn't disappoint. Finally after lengthy applause Ian gave us an encore with his very own 6"nail in head. But thankfully with no explanation.

So there you have it, for anyone still reading this and thinking, "well I don't do mentalism or cards" trust me after watching this lecture you will. Also if you spot Ian performing near you go along, providing magicians are welcome that is, as you will be in for a real treat.