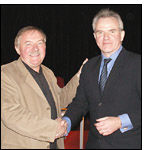 I was privileged to be invited by Derek Lever, to attend a lecture by Ian Rowland at The Blackpool Magicians Club last night. It was held in their very nice clubroom in a hotel right on Blackpool promenade.

The lecture was brand new and Ian, with his usual confident and assured style, gave a wonderful performance, dividing the lecture into two parts. The first dealt with close-up mentalism, something he feels has been overlooked a little in the past. Using only the most basic items, Ian had a clubroom of magicians gasping in amazement at his skill and expertise. In one routine he even bet money on being able to predict a genuine free choice. Needless to say, I lost!

The second half was devoted to card magic. I must admit that I had no idea that Ian is a skilled card worker; his new ideas and new takes on older ones were really amazing. I am not going to even outline his closing effect in case you get the chance to see the lecture. It is too good for me to spoil the final outcome.

There are many well-known magicians in the Blackpool Club that asked me to pass on their complements to Ian; among them were Tom Owen and Mark Raffles.

Ian ended the evening by spending time chatting to people and answering questions. Having met Ian Rowland it is easy to see why he is such a popular performer, he’s such a nice guy.

He will be appearing at The Blackpool Convention in 2007.