Ian Rowland Lecture
At The USM 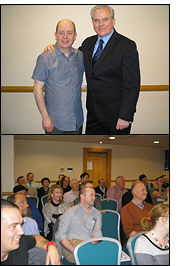 The name Ian Rowland is synonymous with brilliance in magic and mentalism, but his lecture at the USM on Monday 6th October was also an evening of sheer fun and enjoyment. Putting you completely at ease from the start, Ian opened with Song & Chance, predicting the title of a song selected by a spectator from a possible 200. I was the spectator for this impossible feat and I was completely gobsmacked. It was a smooth, effective routine with no messing about.

He presented many effects throughout the night including, The Lying Game, in which he presented the audience with plausible statements about his life which everyone had to guess if it were true or false. Two volunteers helped out, the first of whom only got one correct but the second, with Ian's special guidelines, guessed them all. Much fun was had with this.

In Pseudo Psychic Insults four bits of card were handed to four audience members, on which to describe Ian in one word. He then correctly identified the writers of three and then read the mind of the fourth.

For Party Matrix, our Chairman Alan was to have a special event created and the ingredients were collected from four boards handed out, each with four choices: location, cake, companion and entertainment. Gradually the results became more ominous with Alan's event taking place in Iraq, a dog food cake and Graeme Norton, but of course there was a happy ending.

In his lecture, Ian really had so much knowledge and experience to share with us also, aside from his fabulous material, but I have to close with his signature card routine, Thetalia, where surrounded and from a borrowed shuffled deck he located top poker hands with the deck of cards including full houses, straights, pairs and aces, very easily from the tips of his fingers...no wonder he's banned from Vegas card tables!

Throughout, Ian explained each routine and I am sure we all went away with at least one, if not more, effects to incorporate in our own acts. Friendly, fun and fabulous, it was a privilege to be able to watch Ian Rowland, a genius in the field of magic and entertainment.

Comprehensive lecture notes, if you missed the night, are available from www.ianrowland.com/lecturenotes.