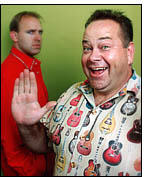 On 8th February, John Archer gave his new lecture to Aberdeen Magical Society. Entitled 'The Handy Lecture' it was 2 hours of great fun and clever ideas for any magician!

The lecture featured about 9 different magical effects as well as many other tricks where you could use similar techniques. It was a tantalising serving with lots of practical ideas.

The nice thing for me about the lecture is that it was a change from the myriad of close-up lectures. John's effects are more for stand-up or cabaret and he effortlessly performed them with many of his jokes and anecdotes making the whole evening entertaining as well as informative.

The thinking that he has put into many of his routines and effects is quite astonishing. He is obviously a seasoned performer that wants to get the maximum impact from any routine. One of the effects called 'Collard' is an adaption of Don Wayne's Room Service effect and makes much more sense. It also uses a puppet character and shows that puppets are not just for pre-schoolers!

His lecture notes are not the cheapest around at £15, but most of them were sold by the end of the night, demonstrating how practical and useful people thought his routines were. The lecture notes are well written and illustrated and John has put the same thought and effort into his notes as he has his effects.

All in all a great night. I would heartily recommend John’s lecture to any magic society that may be thinking of booking an entertaining lecture from a true entertainer.