The Jonathan Royle Lecture (Egg, Sausage & Peas - The Mentalists Cookbook)
The Order of The Magi, Manchester
Reviewed by Stephen Manford (aka Stevie Mandini) 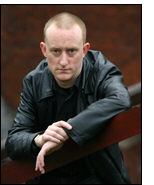 Jonathan Royle is a Magician, Hypnotist, Mentalist, Comedian and Psychic and according to his opening trick (which I'll mention shortly), a "%@#*er". But on top of this, Jonathan is obviously very good at what he does and is very experienced. His skills and shows have taken him around the world and back again.

As he begins the Lecture he honestly and openly explains, that what he's about to show us, is magically not very hard to do but very effective and wows the muggles.

Starting with a prediction effect, he shows an envelope with JR is a _ _ _ _ _ _ on it. He then shows a deck of cards with words written on the faces and allows an audience member, to seemingly have a free choice, by picking a card behind his back. Tonight this card said "%@#*er". He then opens the envelope to reveal a match!

Now this looks very good, but is deviously simple, however this opener is not about the magic but about psychology.

This trick lowers the guard of the audience, gets laughs and gets them on side as, Jonathan repeats many times through the night, the public don't like magic. He follows with another prediction style effect. Again he admits this is to bring the audience on your side.

Using a play on words at the start to get laughs, this trick would surely lower the audience's expectations. Using some classic gags, it has a hard hitting climax with a randomly selected celebrity, which is correctly predicted.

Jonathan talks a lot about psychology and audience management. By lowering their expectations they'll think what you do later will be truly amazing!

On to the next effect, a very entertaining and clever effect which is guaranteed to get the audience's attention. Using 5 volunteers, celebrity face masks and showbiz stars on the floor, this is 10 minutes of pure entertainment, with a triple whammy ending.

Russian Roulette! Now I perform one of the effects Jonathan doesn't like (Devil's Nail) and have never had an issue, but he teaches a very safe, on the fly method, that works, poses little if any risk and is relatively cheap to make. He does however recommend an even safer method which he now uses instead of his own called T-2 Sterile by Randi Rain. Although I'll be sticking with the method I'm comfortable with, I learnt a lot from this section. Playing music that raises the tension in the room and clips of the routine going wrong builds up the drama to create an atmosphere of unease amongst the crowd which is perfect for this routine.

He finished with a very novel effect inspired by his daughter's bedtime routine. The doting dad comes out in this effect as he talks about his daughter, (the audience will be well and truly onside with this!). Using a book of children's TV Characters and number flash cards, 4 volunteers come on stage. This is a mind reading trick with a sucker effect climax which would get a standing ovation every time. Unfortunately, Jonathan has so much material that we would need a good few lectures to get through all of it. That being said I think everyone would have learnt something from tonight.

On top of a very good night, Jonathan offered a bargain of a deal on his lecture notes and other material so I hope you all took advantage! He has recently signed a deal with Murphy's Magic to release his material, so take a look at your favorite Magic Dealer.