Royle Reveals – The Jonathan Royle Lecture
The Order of The Magi, Manchester 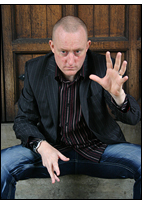 The second of a series of three great Summer lectures at The Order of the Magi saw the return of my good friend and colleague, Hypnotist, Magician & Mentalist Jonathan Royle. This was Royle's third visit to the Magi, and with each lecture the sometimes controversial character brings something different to the table. Not surprisingly, he didn't disappoint.

Whilst it appeared at first that he was to leave the Hypnosis to one side whilst he concentrated on Magical Effects and Mentalism, it soon became apparent that much thought and psychology, drawn from JR's 28 years of experience with hypnosis was put into the handling and presentation of tricks, even starting his lecture with an emotional ploy to set-up a standing ovation 2 hours later!

This was not a lecture designed with the primary aim of teaching a group of magicians a collection of tricks – and whilst every effect was certainly a real-world workable effect – the theme was to look at taking older effects and with a bit of thought revamp them to make them suitable for today's audiences. In fact it was interesting to note that the majority of routines discussed originated at least 40 years ago, with some dating back to at least the 1930's... Jonathan summed this up perfectly, if not with a little tongue in cheek, with the quote -

“If you want to hide something from a magician, write it in a book!”

One effect of particular note was Jonathan's new ideas on a Mentalism / Chance effect which I have had the pleasure of seeing him perform many times whilst he was touring his successful, but strangely titled “Egg Sausage Peas” show, now given a twist of wife-swapping! The original effect using jumbo ESP Zenner Cards packs small, but plays big – and always gets a great reaction from audiences. In Jonathan's standard presentation, he remains on the stage by himself, with 5 music stands to display 5 pairs of cards – and this in itself is large enough to fill a small stage. His new presentation sees him joined by 5 married couples from the audience. Immediately a trick that would work just as well as a close-up effect has been supersized to fill a large performance area, yet the basic props required would fit inside an A4 envelope! Add a few comedy wigs and some innuendo, and you start to see the thought processes that have developed through JR's time working as not only a Mentalist, but also as a Comedy Hypnotist. I suspect that very few members will be putting this new twist into their act as it now stands, however it was demonstrated to show that even the more serious and mundane effects can be presented very differently, and on a larger scale, with some thought.

During his two hour lecture, Jonathan referred to being able to arrive in a new town or city without props, but being able to quickly buy a few small items which required little preparation before presenting a full cabaret or stage show. This was demonstrated perfectly with an envelope, washing line, clothes pegs, A5 cards and a marker pen; all of which can be obtained from a Pound Shop, and be used to make an impossible word prediction that would play well in front of hundreds. Interestingly, the routine originally dates back to 1937, yet bares a little similarity to recently released effects, although using very different methods.

Amongst the other effects revealed were a signed card to box, Jonathan's Pseudo Psychometry routine, Belly Button reading, thoughts on the Floating Light Bulb, and a “simple” and impromptu routine revealing which bottle cap a coin was hidden under, that had a hint of Smash & Stab, without the danger – which, judging by the reactions of the audience when the method was revealed, is a real fooler.

It seemed that Jonathan would have happily continued his lecture into the early hours of the morning. However time was against us, and his two hour lecture was over far too soon. Not surprisingly he was given a standing ovation by the members of the Magi – was it because of the information packed lecture, or because of the psychology used at the very opening of his presentation? I'm sure it's the former, but I'll let you decide.

After attending Order of the Magi lectures, auctions and having been invited to lecture three times over the past 5 years, Jonathan Royle has finally decided to join the Order of the Magi, and I know the other members will make him feel very welcome.