Marcus Eddie Lecture - "In The Moment" 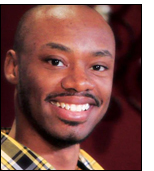 There are those great people in magic that you would definitely love to spend an afternoon in a coffee shop with chatting about magical ideas and seeing what marvels spring into life. Marcus would be at the top of that list! On picking Marcus up from his hotel it was like I had known him for years as his relaxed nature and conversation flowed, like meeting an old friend.

Marcus is one of the nicest and most charming people you will ever meet and add to this his amazing skill and forward thinking to create an experience, and you have a magic superstar on your hands. As our members arrived in the bar area and through the main doors Marcus greeted everyone and introduced himself beginning a conversation that would carry everyone through a fun and fabulous evening of impromptu magic that made you feel that the magic was happening “In the moment!”.

Marcus started his performance and lecture greeting the crowd and during conversation led into a surreal moment of magic in the action of removing a small splinter from his finger, this had everyone sitting forward with instant applause. One effect transitioned smoothly into the next with a lovely version of a broken and restored cocktail stick, this brought back memories of the childhood trick with the handkerchief and matchstick, Marcus’s presentation brought this effect up to date with a modern and stylish look, the method was devilish! This impromptu style of magic happening within a conversation really took the heat off any technical handling that may be at play, saying this the technical moves to create the effects were natural and covered themselves in plain sight, that was the devilish part!

There was plenty for everyone, with impromptu and minimal set up of effects with cocktail sticks (Splinter and Snapkin), a very visual ring penetrating routine with a key ring (Something Borrowed) and a fantastic impossible balancing bottle effect (Water Weigh). This was just the first half which Marcus finished with a perfect appearing deck of cards within an empty card case, this was to be explained in the second half. During the interval many gathered around with questions and a few of our young members showed some of their effects with great feedback from Marcus. Marcus mentioned that he was very impressed at the young talent within our group, I very much agreed.

After the break it was time for a couple of card effects, this lecture was not heavy in card tricks and the couple that Marcus presented were very visual stand up routines (Reload and Blind Cut). All the magic featured in the lecture was worked from minimal pocket space, no table needed and most had an instant reset. Next Marcus presented an effect where two initialed coins transposed and then the initials transposed with an anniversary waltz type finale, a personal revelation of a word from a jumble of letters on a dated, folded piece of paper (Malfunction), a confabulation style effect using post it notes (Post It Note Prediction) and to finish a fantastic bank note and elastic band multiple penetration (Stairway).

Every effect was explained extremely well, with Marcus standing at different locations amongst the members so that everyone could see and understand the handling. Even after the lecture, when only a few of our members and a couple of visitors from the UEA magic society remained, Marcus was offering ideas and advice on effects that were being shown to him. This kind of brainstorming is priceless and left the remaining group energised and eager to develop their effects.

This was such a valuable evening of creativity and simplicity of method presented by a very talented and warm-hearted performer, it would be a pleasure to have Marcus back to lecture on a future visit to the UK.


© Steve Majes MMC, Secretary of The Anglian Magic Society, May 2018