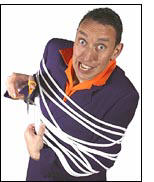 Last night, Mark Shortland lectured at the Mystic Ring in Dunstable. I’d never seen any clips or footage or Mark, but I’ve been told countless times that he is excellent. So I went along with an open mind and feeling quite excited. Mark is, in one word: friendly. I doubt I’m alone in thinking that we are lacking “friendly” people in magic today. If only there were more with similar personalities. He began his lecture by asking us what type of magic we were into on the whole. On top of everything else Mark is an outstanding reminder that presentation really IS everything.

He started with an effect where his signature changes place with a spectators on two pieces of paper. One isolated in a card box from the start. Although not for me, this is a good trick in terms of plot and another thing that makes it great for lay people is it involves their name and is therefore personable. Good trick.

He then moved into the world of playing cards and showed us an effect which again, involved someone’s name. I felt a bit guilty because when Mark asked me to think of someone’s name that’s close to me; I thought of my sister Joely - not the most every-day name in all the world! My reply to his comment “you don’t hear that everyday” was “I do actually.” I’ll confess that I borrowed that one from Jimmy Carr.

Next he showed us a great trick where a toy car becomes embedded on the back of a signed card only to drop of when flexed. This was slightly reminiscent of the classic Chicago Opener plot, which I really like. It’s hard to describe so the only thing I can suggest is that you book him for your own club. More on that later.

Mark then showed us a really elaborate and impressive mentalism routine which involves the use of three spectators, lots of stupid games, prizes and three predictions referring to the number of points that each one would get in playing their individual games against Mark. The three participants were given the choice of three different chocolate bars as prizes only to find that Mark had predicted which volunteer would pick which. Fantastic stuff. After the interval he explained the whole thing in great detail thank goodness!

He then went on to show us his restaurant act. Starting off with a spongeball routine, going into ambitious card with an Omni deck finish and then as an encore to find the card folded up in the box. The table act then ended with a chop cup. As Mark himself says, there’s nothing devastating about the set but what was really good is that he had ideas, tips, do's and don'ts about all of the effects in this segment. His advice on making the chop cup play for the whole table was fantastic.

He had some lecture notes to sell at the end which contained most of what he showed plus more. Including a trick with daises… you’ll have to buy the note to find out. If you’ve never seen him book him, if you’ve seen him before, book him still. Thanks Mark for a superb evening.